Hyundai Motor cruises ahead in China

Hyundai Motor cruises ahead in China 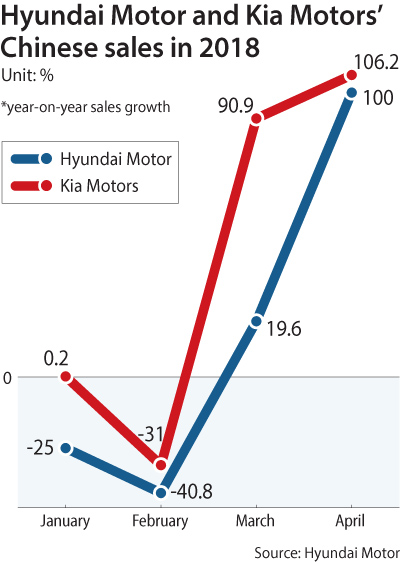 Hyundai Motor and Kia Motors may be bouncing back from last year’s annus horribilis with buoyant sales in China.

The sister automakers’ Chinese sales in April more than doubled over the year before on the back of new SUV models and localized strategy - and the ending of an unofficial boycott of Korean products because of Seoul’s deployment of an American missile defense system.

“It is true that there was a base effect in sales figure because of the Thaad [missile shield] issue last year,” Hyundai Motor said in a statement.

“But it is also true that the sales are beginning to see a recovery trend,” the company added. “While we saw continuous negative growth from Jan. 2017 to February this year, sales in March grew 35.4 percent year-on-year.”

The nation’s two largest carmakers believe the recovery in China could lead to overall growth in the global market because China is their biggest market followed by Korea.

The companies will encourage growth in China market with a new lineup.

Hyundai Motor launched the Encino, a small SUV, in April and some 4,385 have already been sold. Kia Motor’s strategic midsize Zhi Pao SUV, which started sales in April, is already the third most popular model in terms of sales. It sold 4,836 units in April, following the K2 and K3.

“Hyundai and Kia are going to concentrate on fortifying their SUV lineup in China,” the company said. “Growth in SUVs will contribute a lot to the carmakers’ profitability,” it added.

Eco-friendly cars will also be emphasized this year in China.

Hyundai Motor plans to launch the Sonata PHEV, and Kia the K5 PHEV in the latter half of this year.

Riding the early momentum, Hyundai and Kia said they will reach sales of 1.35 million units in China this year, compared to 1.14 million last year.