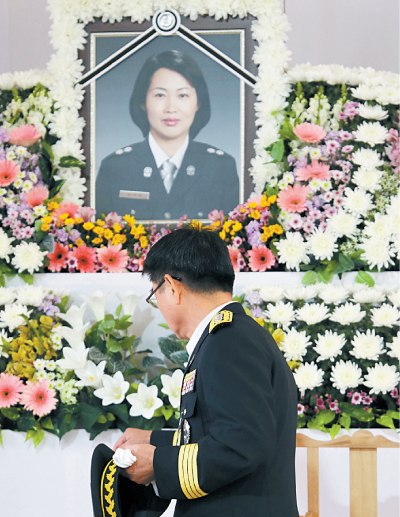 A firefighter pays tribute at the mourning altar for the late female firefighter Kang Yeon-hee in Iksan Fire Station in North Jeolla on Thursday. [YONHAP]

The death of a female firefighter has become a national issue after her colleagues came forward with accounts that a drunken man who physically and verbally assaulted her one month ago might have caused her death.

Local authorities released CCTV footage of the attack on Wednesday, putting a spotlight on the very tough working conditions facing firefighters - and the emotional toll they can exact.

The case revolves around Kang Yeon-hee, 51, a veteran firefighter at the Iksan Fire Station in North Jeolla, who was working on a paramedics team and had nearly 20 years of field experience. Kang died Tuesday, a week after being hospitalized following a cerebral hemorrhage.

According to the Jeonbuk Fire Service, the North Jeolla branch of Korea’s fire safety headquarters, Kang approached a 48-year-old inebriated man surnamed Yoon who was lying unconscious in the middle of a road on April 2 at around 1 p.m. near a train station. As Kang and her co-workers moved Yoon to an ambulance and transported him to a nearby hospital, he punched Kang in the face and head at least six times and made offensive sexual comments.

The assaults were clear in the CCTV footage released to the media Wednesday and broadcast on the news.

Kang started suffering from insomnia after the incident and told her boss, Jeong Eun-ae. “As a woman, the offensive insults I heard were even worse than the fact that he hit me,” Kang told Jeong.

On April 5, Kang was walking down a road when she suddenly felt nauseous, vomited and collapsed. Doctors said that her autonomic nervous system was disrupted due to the stress of the assault she had suffered.

Kang developed hiccups that she couldn’t control, and uncontrollable twitching as well. Her symptoms got so bad she made reservations at a hospital in Seoul early this month for a checkup.

She didn’t make it.

On April 24, Kang passed out in her home from what doctors later described as a cerebral hemorrhage, or stroke. Seven days later, she took her last breath a little past 5 a.m. on May 1.

By then, Yoon was already charged with violating domestic fire service laws by obstructing Kang’s professional activities, including by physical and verbal assault, which carries a maximum penalty of 30 million won ($27,870) in fines or five years in prison. Prosecutors raised the possibility of pressing a heavier charge if forensic officials conclude Yoon’s assault directly led to Kang’s death.

Police said Wednesday they asked the National Forensic Service for an autopsy.

According to police, Yoon was jobless and previously jailed for physical violence.

Kang is survived by her husband, also a 51-year-old firefighter, and two sons aged 11 and 16. Her funeral was held Thursday morning at the Iksan Fire Station. In acknowledging her death in the line of duty, the Jeonbuk Fire Service said it planned to posthumously promote her by a rank.