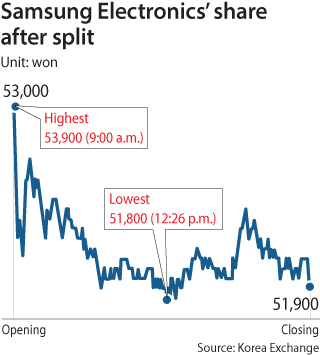 Millions of Samsung Electronics shares changed hands on Friday as the company returned to the main bourse after a three-day trading suspension during an ambitious 50:1 stock split.

According to the Korea Exchange on Friday, a total of 39.45 million shares of the company were bought and sold on the local stock market.

Trading of Samsung Electronics shares was suspended for three trading days from April 27.

On the final day before the suspension, about 600,000 shares were traded.

Although the chip behemoth’s shares closed Friday’s session at 51,900 won ($48.16), down 2.08 percent compared to the opening, experts explain that the 50:1 split made Samsung shares much more accessible to retail investors, which is why the trading volume skyrocketed after the move.

“Samsung proceeded with a 50:1 stock split, something unprecedented in the domestic stock market,” said Lee Seung-woo, a researcher at Eugene Investment & Securities, who added that the split indicates that the company will better guarantee returns, including dividends, for investors and will invite more retail investors.

Other analysts highlighted that the move will stimulate the investment appetite of retail investors who lack the capital compared to institutional investors.

More than 2 trillion won of stocks were traded on Friday.

By comparison, 1.6 trillion won was traded on April 27, the day after the company announced that it posted a record profit in the first quarter of this year.

From January to March this year, the company raked in 15.64 trillion won in operating profit, up nearly 60 percent from a year earlier, setting a record for the fourth quarter in a row. Its revenue grew 19.82 percent to 60.56 trillion won in a year and its operating margin stood at 25.8 percent.