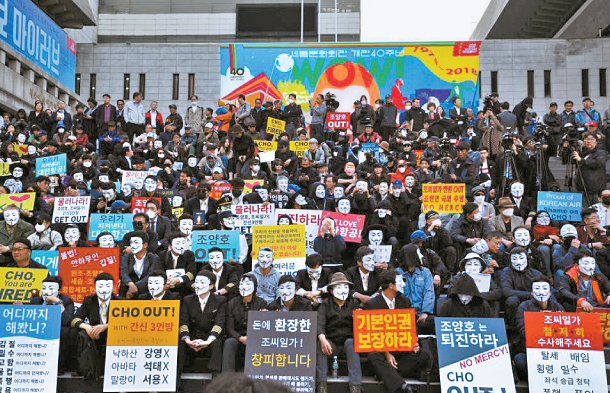 Korean Air employees and members of the public protest against the airline’s owner family in a candlelight vigil held Friday in Gwanghwamun, central Seoul. [JO EUN-NAM]

About 500 people gathered outside the Sejong Center for the Performing Arts in Gwanghwamun, central Seoul, from 7 p.m. Friday for a candlelight vigil to demand the ouster of the Cho family.

The historic Gwanghwamun Square is where millions of Koreans gathered to demand the impeachment of former President Park Geun-hye in late 2016 and early last year.

About 500 Korean Air employees and other citizens participated in the rally, many donning Guy Fawkes masks and covering their faces. Passersby also stopped to cheer on the protest.

“I came out because I was so infuriated by Chairman Cho Yang-ho’s wife Lee Myung-hee shoving employees around,” said a woman from Yeonnam-dong, northern Seoul, who came to the rally after seeing news reports about the Cho family. “If that is the treatment our future children will receive, it must be stopped.“

Many Korean Air employees wore their uniforms. Some seemed to have stepped directly off flights and headed to the protest with luggage in tow.

Park Chang-jin, the chief flight attendant that was the main victim of the infamous 2014 “nut rage” incident, led the event.

An anonymous organizer of the vigil, who also runs the KakaoTalk chatroom where thousands of airline employees swap stories of the owner family’s abuse, explained that originally about 100 people were expected to attend the rally. The crowd grew as people that were not connected to Korean Air showed up to show their disapproval of chaebol family power abuse.

Airline employees were cautious about revealing their identity in the lead up to the event.

In the KakaoTalk chatroom a number of guidelines were shared until right before the vigil so employees can still continue their work at Korean Air after the protest.

Earlier in the day, police requested an arrest warrant for Cho Hyun-min, the 35-year-old Korean Air heiress, on charges of violence and disturbing business with violence.

The warrant was requested by the Gangseo Police Precinct in western Seoul, which has been in charge of the investigation into allegations that Cho threw a drink at advertising executives on March 16. The former senior vice president of Korean Air was enraged when employees weren’t able to answer a question.

According to police, Cho denied the charges. The decision to issue an arrest warrant was made following accusations that Korean Air and Cho were attempting to influence witnesses.

The prosecution rejected the request.