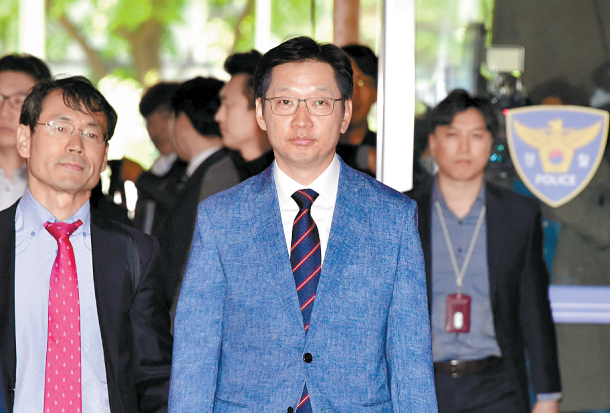 Rep. Kim Kyoung-soo, a Democratic Party lawmaker, enters the headquarters of the Seoul Metropolitan Police Agency in central Seoul on Friday to answer questions about a scandal involving the ruling party and allegations that he was part of an online campaign to manipulate public opinion. [YONHAP]

Police questioned a ruling party lawmaker on Friday over his alleged involvement in a campaign to manipulate online opinion in favor of President Moon Jae-in during last year’s election.

The lawmaker, Rep. Kim Kyoung-soo of the Democratic Party, also faced questions about whether he or one of his aides accepted bribes in return for helping political operatives get jobs in Moon’s government.

“I have been requesting multiple times for the authorities to investigate me as soon as they can,” Kim told reporters before entering the Seoul Metropolitan Police Agency in central Seoul at around 9:50 a.m. “It’s a relief the investigation is taking place today. I will explain things clearly and answer questions accurately. If needed, I am willing to answer to an independent counsel or something greater.”

Opposition parties have been calling for an independent counsel to investigate the ruling party, with some lawmakers holding rallies in Seoul to demand a probe.

“Just organizing rallies and holding up bills at the National Assembly, where a supplementary budget and ratification of the Panmunjom Declaration awaits, is a very irresponsible act to the people,” the lawmaker said.

The Moon administration has asked the parliament to pass an extra budget for the year and ratify a declaration that Moon signed with North Korea’s leader during their summit at Panmunjom last month, but opposition parties have been stalling them.

Representative Kim was questioned as a witness in an ongoing investigation of Kim Dong-won, a political blogger arrested in March for allegedly using software to fiddle with comments on Naver, the most widely accessed portal site in the country. According to police, the blogger manipulated “like” counters on certain political comments to give the appearance that one opinion dominated online.

Authorities are investigating the lawmaker’s ties with Kim Dong-won. In text messages that the two men exchanged between January and March last year, in the midst of the presidential election, Representative Kim sent links to websites and articles favorable toward Moon and asked Kim Dong-won to share them. The blogger usually obliged, police said.

After Moon was elected, Kim Dong-won then asked the lawmaker to recommend his associates for an administrative position at the Blue House and for the post of consul general in Osaka, Japan. Representative Kim admitted to forwarding their names in a news conference last month.

“Kim Dong-won approached me saying that he wanted to recommend people to the Moon administration, and I told him that we have an open recommendation system and that I can relay recommendations,” the lawmaker said. The Blue House later told him that the recommended people were not fit for the jobs, and Representative Kim relayed the information to the blogger, “which is when the problem started,” he said.

After the request was denied, Kim Dong-won, according to police, sent threatening text messages to the lawmaker and his former aide, mentioning 5 million won ($4,650) that the aide received from one of Kim Dong-won’s associates.

Authorities questioned the aide on Monday and again on Friday. They want to know how much Representative Kim was involved in the transaction and whether he knowingly asked Kim Dong-won to manipulate the comments section on Naver.