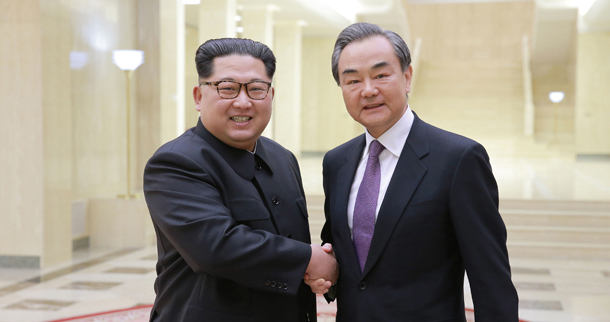 During his meeting with China’s top envoy on Thursday, North Korean leader Kim Jong-un reiterated his position that the Korean Peninsula ought to be free of nuclear weapons, China’s Ministry of Foreign Affairs said in a statement Thursday.

“North Korea is firm on realizing a nuclear-free Korean Peninsula,” Kim reportedly told Wang Yi, China’s foreign minister. “Through a restoration of dialogue, the North hopes to discuss removal of the basis of threat to peace on the peninsula.”

On April 27, Kim visited South Korea to meet with its president, Moon Jae-in. The two leaders signed a declaration, known as the Panmunjom Declaration, affirming the common goal of “realizing, through complete denuclearization, a nuclear-free Korean Peninsula.”

In his meeting with Kim on Thursday in Pyongyang, North Korea’s capital, Wang praised Kim for the summit with Moon and emphasized China’s intention to remain abreast of regional dialogue and communication.

“The positive change on the Korean Peninsula was due to North Korea’s appropriate judgement of the times and bold decision,” Wang told Kim, according to China’s Foreign Ministry. “I congratulate the success of the inter-Korean summit and support the Panmunjom Declaration.”

In the declaration, Moon and Kim agreed to work toward a peace treaty between the two Koreas. Fighting in the 1950-53 Korean War technically ended with an armistice rather than with a formal peace treaty.

“China supports an end to the state of war [on the Korean Peninsula] and transformation from the state of armistice to peace,” Wang said, “as well as a shift in the strategy for economic development and a resolution on security concerns of the North during the denuclearization process.”

Wang emphasized that “in all these factors, China wants to maintain communications with the North and strengthen cooperation.”

Kim replied in kind, according to the ministry. “We also highly appreciate the active contribution of China for peace on the Korean Peninsula, and we hope to strengthen strategic communication with China.”

North Korea’s state newspaper, the Rodong Sinmun, reported on the meeting in its front page Friday. “In the meeting, [Kim and Wang] agreed to develop further on all fronts the unity between the two countries and the level of close cooperation,” the report said.

North Korea watchers said Wang’s visit to Pyongyang signifies China’s intention to preclude any so-called China passing as talks are being arranged between the two Koreas and between North Korea and the United States.

“It is likely that Wang strongly expressed that China should not be passed in midst of the process of moving the Korean Peninsula from the state of armistice to signing a peace treaty, a process that’s ongoing through the inter-Korean and North-U.S. summits,” a South Korean diplomatic source in Beijing said.

But some Chinese experts denied the idea that Wang was dispatched to Pyongyang out of fear that China was being passed over.

“Reports that suggest Wang was dispatched in a hurry after the Panmunjom Declaration included talk of trilateral meetings involving the two Koreas and United States but not China are not true,” a North Korea watcher in Beijing said on the condition of anonymity. “Wang’s visit to North Korea was confirmed around April 10, before the inter-Korean summit took place. The restoration of good relations between China and North Korea is something that both sides need.”