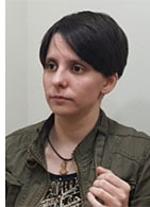 A Hungarian baduk player competing in Korea is demanding an apology from a star Korean player for allegedly raping her at his home.

In an interview in Seoul on Tuesday, Diana Koszegi told the JoongAng Ilbo that she has not received a response from Kim Seong-ryong, a top-level baduk player, after she claimed on an online forum on April 17 that he forced himself on her on the night of June 5, 2009. The accusation made headlines after its posting and was followed by a joint statement by fifty women baduk players in support of Koszegi on April 19. Following another sexual misconduct scandal in which a baduk player installed a spy camera in a women’s bathroom, the Korea Baduk Association, which oversees professional baduk players in Korea, voted to expel Kim from the organization on April 24.

On April 18, Kim denied the rape allegation through an associate, claiming his relations with Koszegi were consensual.

Baduk, also known as Go, is an ancient board game with an enormous public following in Korea. Kim Seong-ryong has reached 9-dan, the highest level, won multiple competitions and was a coach in the Korean Baduk League until his recent dismissal.

Koszegi claimed her online posting on the professional baduk players’ forum was meant to elicit an apology from Kim and she never imagined it would receive so much attention from the public.

In the interview, she revealed new facts not mentioned earlier. “After I was raped, I asked Kim what had happened, but he just shrugged it off callously,” she said. Later on, she tried to ask him for an apology but he attempted to force himself on her again after tailing her to her house. “Thankfully nothing happened that day, but I avoided him since,” she recalled.

Koszegi also revealed why she kept silent about the incident for such a long time. “I was a foreigner with no power in Korea, and was only here on a visa,” she explained. “I was unsure people would believe me if I exposed the incident.”

She substantiated her allegations by showing an email she sent to her brother in Hungary on Nov. 11, 2009, during the 15th GS Caltex Baduk Competition. Koszegi wrote to her brother detailing the night of the incident after she was set to face Kim in the first round of preliminaries.