Unlike father, unlike son

Unlike father, unlike son

KANG MIN-SEOK
*The author is an editorial writer of the JoongAng Ilbo. 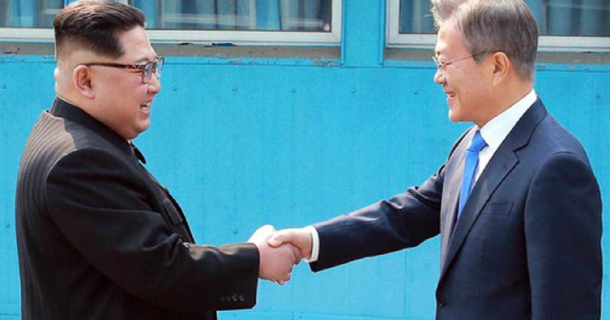 President Moon Jae-in and North Korean leader Kim Jong-un suddenly closed the gap of the “lost 11 years” at Panmunjom. One thing they disagreed over was when Moon proposed the resumption of the Seoul-Pyongyang soccer match, a pet project of Kim Jong-il. Kim said he preferred basketball. But reading the transcript from the 2007 summit between former President Roh Moo-hyun and North Korean leader Kim Jong-il, I think there could be something more to Kim’s break from tradition.

“Kye-kwan, come over here,” Kim Jong-il said to the North Korean foreign minister when he met with President Roh. Kim instructed the foreign minister to explain a “good document” he had made with the United States. The minister explained that North Korea planned to report its nuclear plan, materials and facilities by Dec. 31, 2007, and the United States would remove North Korea from the terrorism sponsoring state list and lift the enemy state status.

This is the famous Oct. 3 Agreement. But after North Korea refused to allow materials used in nuclear activities to be sampled for tests outside of the country, the “good document” was scrapped. Kim explained, “We are not registering the prototypes that are already weaponized. If the United States promises to offer compensation, we can use it as leverage.”

It is hard to trust whether North Korea would properly report its completed nuclear weapons and dismantle them. But it doesn’t seem like Pyongyang has come this far to deceive Seoul. What is Kim Jong-un’s true intention?

Former Minister of Unification Lee Jong-seok said that Kim Jong-un’s leadership is unlike that of his father, who was calculating and liked to take the lead. In fact, the father and son are very different.

When Roh proposed Kim Jong-il make a return visit to Seoul, Kim refused. “Why should I go when the world is already surprised?” “Why should I do that when the opposition Grand National Party is so hostile?” “I have to consider the sentiment of the people in the South.” But when Moon proposed Kim Jong-un visit the Blue House, he did not hesitate and immediately said he would come anytime if he is invited.

Lee says that it is not simply a style difference but a fundamental difference, as Kim Jong-un is pragmatic and realistic whereas his father valued formality and liked to boast. During the summit, Kim Jong-un allegedly discussed Vietnamese-style reform with President Moon. If Kim really has an ambition to pursue reform, it explains why he rushed to engage in denuclearization talks. In fact, it is the pragmatic way to get his money’s worth rather than remaining a “rocket man.”