Where the Choco Pie has liquor and everything is bananas

Where the Choco Pie has liquor and everything is bananas 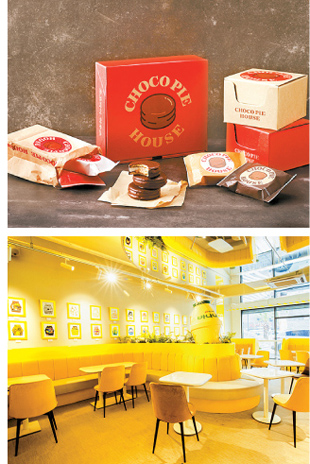 Korea’s most iconic drinks and desserts now have cafes themed after them.

In February, Orion opened a Choco Pie House at Shinsegae Department Store’s Gangnam branch. Here, the beloved pastry has gotten a luxurious upgrade: its breaded layers are covered in chocolate made from 100 percent cocoa butter and held together by a rich marshmallow filling made with natural vanilla beans and Grand Marnier. The lavish treats are 2,000 to 2,500 won ($1.90 to $2.30), almost five times the price of the Choco Pie found in convenience stores.

About 5,000 of the fancy pies, which took a whole year to develop, are made every day at Choco Pie Houses in the Gangnam Shinsegae Department Store and Jukjeon branch in Gyeonggi, which opened in March.

“Although the original Choco Pie is famous for evoking a sense of warmth as a snack that the entire family can enjoy, we wanted to go for a younger and newer feel this time,” said Seo Myung-hee, who develops new businesses at Orion.

“Desserts can only become popular once endorsed by young people in their 20s and 30s. We put a lot of energy into polishing the appearance of the luxury Choco Pies, which come in espresso cream, caramel salt and red velvet flavors.”

Dongsuh Foods, which makes coffee and tea drinks, has also gotten in on the game.

Last month, it opened Maxim Plant, a five-story cafe named after its most famous caffeinated drink. The Maxim brand of instant coffee mixes is one of the oldest in the Korean market, starting from 1978. At the cafe, customers can learn about the history of the company and learn about the coffee-making process in general.

Mocha Gold, the most popular flavor among the Maxim mixes, has already had pop-up cafes themed after it since 2015. These cafes temporarily open at different locations across the country, and they’ve been run in Seoul, Busan and Jeju Island. Each is decorated in a different style; some have been made to look like photo studios and bookstores.

“We established Mocha Gold pop-up stores to familiarize the younger generations with coffee mixes, which may be a new concept to them,” a spokesperson for Dongsuh Foods said. “We also wanted to present a fresh angle to customers who are already familiar with Mocha Gold.”

Binggrae, a beverage maker, has been running Yellow Cafe since 2016. The key ingredient of the drinks and snacks served here is the company’s signature Banana Flavored Milk, which came out in 1974. Among the treats are soft serve and milkshakes made with the classic drink. Keychains resembling the drink’s iconic barrel-shaped packaging can also be purchased here.

The first Yellow Cafe opened at the popular tourist destination of Dongdaemun in central Seoul, and a second shop opened on Jeju Island last year. An accumulated 320,000 people - including tourists from abroad - have visited the two cafes so far, bringing Binggrae 2.5 billion won in sales.

“Not many young people in their teens or 20s know about our companies’ older products,” said Lee Hu-sung, who handles dairy products at Binggrae. “Our marketing strategy is to create a place where they can sit down and fully experience banana-flavored milk.”

These cafes can also be a good way to expand into other markets.

Orion plans to set up at least 28 more Choco Pie Houses in Korea this year and hopes to open boutique cafes in Shanghai.