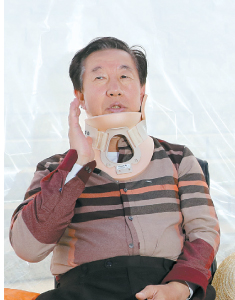 Rep. Kim Sung-tae, floor leader of the largest opposition Liberty Korea Party, was punched in the face by a 31-year-old man on Saturday at the National Assembly during a hunger strike calling for an independent probe into an online opinion rigging scandal allegedly linked to a lawmaker from President Moon Jae-in’s Democratic Party.

On Kim’s third day fasting in front of the main building of the National Assembly compound in Yeouido, western Seoul, a young man approached him at around 2:30 p.m., saying, “My father and I are supporters of the Liberty Korea Party. I came from Busan,” according to police. Kim, who at the time was walking up the staircase of the main building to go to the restroom, walked towards the suspect and reached out his hand for a handshake. The man bowed slightly to greet Kim, but then struck the lawmaker in the chin. Kim stumbled backwards and then fell over.

As Kim’s aides tackled the suspect to the ground, he yelled and made claims that he was a “retard” and never dated a woman in his life, at one point expressing anger that the Liberty Korea Party was opposing efforts by the Moon administration to ratify an inter-Korean agreement signed between the two Korean leaders on April 27 at the latest summit.

Police immediately arrested the man and took him in for questioning and said they were planning to seek a pre-trial detention warrant. Kim took an ambulance to a nearby hospital and received medical treatment. He returned to his protest tent that night wearing a neck brace, saying he’d continue the hunger strike.

According to police, the suspect claimed he had no mental illness and that he wasn’t affiliated to any political group or party. He allegedly drove to Paju, Gyeonggi, earlier that day to oppose a local civic group that tried to send propaganda leaflets criticizing Kim Jong-un across the border, but steered toward the National Assembly after he was denied access by police. Police quoted the suspect as saying he attempted to “terrorize” Rep. Hong Joon-pyo, leader of the Liberty Korea Party, as well, though further details were undisclosed.

The Liberty Korea Party held an urgent party meeting on Saturday at 9 p.m., calling the assault a “political terror attack.” The conservative party said they would join Kim’s hunger strike, dividing the party in groups of 10 and taking turns fasting for 24 hours.

The ruling Democratic Party expressed “regret” in a statement Sunday, but quickly urged the Liberty Korea Party to stop holding up negotiations in the National Assembly and said opposition lawmakers should return to the chamber by Tuesday.

The attack came a day after Rep. Kim Kyoung-soo of the Democratic Party was questioned by police over his involvement in a campaign to manipulate online opinion in favor of Moon during last year’s election.