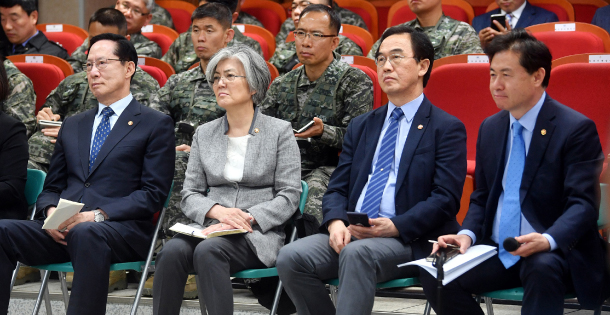 From left, Defense Minister Song Young-moo, Foreign Minister Kang Kyung-wha, Unification Minister Cho Myoung-gyon and Oceans Minister Kim Young-choon listen to a briefing during a visit to the Marine Corps on Baengnyeong Island on Saturday, in a photograph released by the Ministry of National Defense Sunday. [YONHAP]

Their trip is seen as Seoul’s first step to enforce the summit agreement to devise a practical scheme to turn the areas around the NLL into a maritime peace zone to prevent accidental naval clashes and guarantee safe fishing activities.

During talks with islanders, the unification minister pledged to maintain close communication with them over the issue of the envisioned peace zone to be discussed at inter-Korean military talks.

“The peace waters will be zoned off through military talks with the North, and the ministries of unification, defense and oceans will have close consultations to devise a well thought-out plan for it,” Cho said.

Touching on the rare mention of the NLL in the joint inter-Korean declaration, Cho said it might signal a shift in the North’s stance on the line.

“In the declaration, the North used the expression NLL as it is…We cannot say yet that the North has recognized it, but I think there could be a shift in the North’s attitude,” he said.

“The basic premise is to keep the NLL intact,” he added.

Pyongyang disputes the sea line on the grounds that it was drawn unilaterally by the then-U.S.-led UN Command after the end of the 1950-53 Korean War. The communist state has argued the NLL should be redrawn further south.

The waters around the NLL have been the peninsula’s major flash point. There were armed naval clashes in 1999, 2002 and 2009. In 2010, Pyongyang carried out two deadly attacks near the NLL that killed a total of 50 South Koreans, including two civilians.

The oceans minister, meanwhile, cautioned against any “rosy” illusion over the peace mood following the cross-border summit.

In their Panmunjom Declaration, they affirmed the shared goal of “complete denuclearization” and agreed to halt all hostile acts against each other, as well as to seek a formal end to the 1950-53 Korean War.