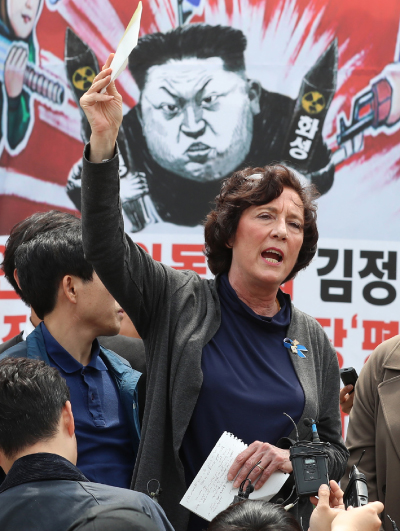 Suzanne Scholte, chair of North Korea Freedom Coalition, speaks at an impromptu press conference on Saturday in Paju, Gyeonggi, after an attempt to send leaflets criticizing the Kim Jong-un regime across the border by a local civic group was blocked by police. [OH JONG-TAEK]

A local civic group led by a North Korean defector attempted to send leaflets criticizing the Kim Jong-un regime across the border last weekend but was blocked by police, after both Koreas agreed at their latest summit not to disseminate propaganda material into each other’s country.

But Park Sang-hak, leader of Fighters for Free North Korea, claimed he already flew 150,000 leaflets into the North last Thursday from an undisclosed venue in Gimpo, Gyeonggi, accusing Pyongyang’s recent olive branch to Seoul of being a “disguised peace offensive.”

Park’s attempt to send more leaflets on Saturday noon from Paju, Gyeonggi, just south of the inter-Korean border, fell on the last day of the so-called North Korea Freedom Week, the last week of every April during which nongovernmental organizations promoting human rights in North Korea shed light on the regime’s atrocities.

The South Korean government had urged Park’s group to refrain from floating the leaflets in respect for the Panmunjom Declaration, signed between South Korea’s President Moon Jae-in and North Korean leader Kim Jong-un during their summit on April 27. The declaration included an agreement to “transform the demilitarized zone into a peace zone” by ceasing all hostile acts as of May 1, including the dissemination of propaganda through loudspeakers and leaflet drops.

The loudspeakers, operated by each country’s military, have already been dismantled and removed from the border. But the leaflet drops remain a perplexing issue for Seoul because local private groups conducting them are refusing to back down, citing freedom of expression.

Nearly 300 police officers were dispatched around the Dora Observatory last Saturday, a tourist attraction in Paju where visitors can peer into North Korea using coin-operated binoculars. Park and his truck, loaded with leaflets criticizing Kim Jong-un’s human rights abuses, were blocked at the parking lot.

Some 150 members of a left-leaning civic group and Paju residents rallied nearby, urging Park to live up to the Panmunjom Declaration.

North Korea hasn’t mentioned anything on the propaganda leaflets through its state-run media yet. On Sunday, a report from the Korean Central News Agency cited an unidentified spokesman from the North’s Foreign Ministry as saying that the United States must stop pursuing “its pressure and military threats against” North Korea, adding that Washington’s talk of Pyongyang human rights abuses and deployment of strategic assets to the Korean Peninsula were a “dangerous attempt” to ruin the hard-won atmosphere of dialogue and bring the situation back to square one.