The unification flag signed by members of the joint Korean women’s table tennis team is headed to a museum, a South Korean official said Sunday. 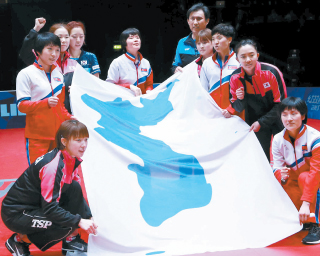 Members of the unified Korean women’s table tennis team hold up the unification flag after the semifinal game against Japan at Halmstad Arena in Sweden on Friday. [YONHAP]

South and North Korea teamed up for a bronze medal at the World Team Table Tennis Championships in Halmstad, Sweden, last Friday.

Ryu Seung-min, an International Olympic Committee (IOC) member from South Korea who engineered the deal for the joint team, said the International Table Tennis Federation (ITTF) will commemorate the occasion by displaying the flag, 2 meters wide and 3 meters long (6.5 feet wide and 9.8 feet long), at the ITTF Museum in Shanghai, China.

“The ITTF prepared the large flag after the joint team was assembled [last Thursday],” said Ryu, the 2004 Olympic table tennis champion in the men’s singles. “In addition to the flag, uniforms worn by the players will also be displayed. I am so proud to see them go to the museum.”

South Korea and North Korea were scheduled to play each other in the quarterfinals on Thursday but decided just hours before that showdown to join forces instead. They advanced to the semifinals as one team.

The ITTF hailed the formation of the single Korean team as a “historic” occasion celebrated by other participating nations.

Japan defeated Korea 3-0 in the semis, but since there is no third-place contest, Korea shared the bronze with Hong Kong, the other loser in the semifinals.

The Koreas hadn’t competed as a joint team in table tennis since the 1991 World championships in Chiba, Japan, where the women’s team stunned the heavily favored China to capture the gold medal.

Of the nine players, only three - Jeon Ji-hee and Yang Ha-eun from the South and Kim Song-i from the North - saw action in the semifinals, but all nine will receive medals.

Buoyed by the positive reception for the joint team in Sweden, the Korea Table Tennis Association (KTTA) is also pushing for a unified squad at this year’s Asian Games in Indonesia. It has finalized its proposal and will have further discussions with the ITTF.

The KTTA is hoping both Koreas will retain their allotted roster spots - two players each in the men’s and women’s singles, two teams each in the mixed doubles and five players each in the team event - even if they combine their squads, so that the unified team won’t be put together at the expense of anyone who would otherwise qualify for the Asian Games.