Hi-tech solutions for the modern parent

Hi-tech solutions for the modern parent 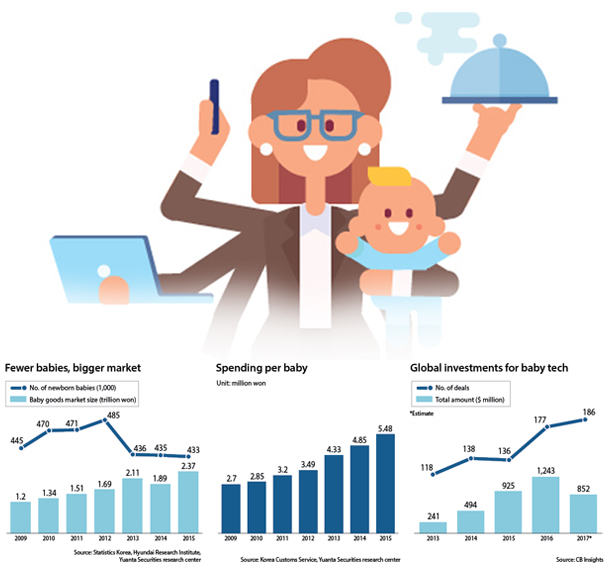 Yoon Young is an office worker in her early 30s and the mother of a six-month-old daughter. Every morning - often very early in the morning - Yoon reaches for her phone to record what time her daughter woke up in an app called BabyTime. She uses the app at least 20 times a day, recording all sorts of details of her baby’s life, such as when she changed her diaper and how much she eats.

“It’s important to feed babies at this stage every three to four hours - the app helps me keep track,” she said. “I can also check the total amount of food she has eaten to see if it’s the right amount for her age. Eating too little or too much could be a problem.”

BabyTime isn’t the only high-tech help that Yoon gets. As well as two other apps, she also often turns to an online community that gives advice on baby-related products. But Yoon doesn’t think she’s a particularly IT-savvy mom.

In Korea, it wasn’t that long ago that new parents learned everything they needed to know about raising a child from older relatives and folk remedies. This approach is rapidly changing as a new generation of parents who grew up with computers and smartphones carry their reliance on IT solutions into parenthood.

Their tech-friendly approach to parenting is giving birth to a whole new realm of apps and devices - baby tech.

Ranked No. 4 on Google Play Korea’s list of baby care apps, BabyTime is one of the most popular apps among parents with babies that are too young to express themselves.

Simply put, the app is a digital substitute for a handwritten baby notebook. Parents can keep detailed records of sleep, meals and diaper changes. The advantage of keeping a digital record is that the app can collate data to show patterns in a child’s metabolism, as well as a comparison to other babies the same age.

“Babies don’t talk, but their health issues show up through irregular patterns. It’s also much easier to tell why a baby is crying,” says the company. “The data-based app is also effective in giving a sense of assurance to anxious first-time moms.”

Another must-have app among young parents is Yeolnayo, meaning “have a fever” in Korean. It ranks third on Google Play Korea’s list of baby apps.

Yeolnayo is a health-related app that offers home remedies for fevers according to a baby’s temperature. It starts by determining if a child actually has a fever, then suggests possible treatment or advises an immediate trip to the hospital.

The app is all about the minute details. Medicine recommendations are data-driven tips detailing exactly how much of what kind of medicine the child should take and which substances to stay away from. The suggested amount of water intake is decided not only by the age but also what and how much the child has eaten that day.

Parent company Mobile Doctor’s founder and CEO Shin Jae-won was previously a medical journalist with a degree in family medicine. Shin said he was surprised to see how much incorrect advice and tips was being shared in online communities.

“One day I found a posting on an online community that advised putting wet socks on a baby to help lower their body temperature,” he said.

“The time interval for checking body temperature and the amount of medicine intake are simple tips but a lot of moms didn’t seem to know them. The internet has a lot of unverified information and I thought it needed to be corrected.”

A sense of community

Some baby apps aim to provide a platform to bring people together. Online communities are an indispensable source of information for many Korean parents.

“If you look at online blogs, it’s easy to spot which model of a product is the most popular among other parents,” said Yoon. “After seeing which item is the most popular, I look at reviews to decide whether I should buy it as well.”

Families today are smaller, and multiple generations living together under the same roof is increasingly uncommon, making it harder for new parents to turn to their own parents for advice. It is also more and more common for today’s generation of young parents to disagree with their parents’ opinion of how a child should be raised.

Launched in 2013, MomTalk was one of the earliest smartphone apps to offer a platform for parents to exchange information and advice. The app offers online bulletin boards on multiple themes, from how to raise a child to more personal issues like dealing with difficult in-laws.

The app is particularly popular with young parents who are the first in their friend circle to have a child. Without much of a support network to fall back on, the advice from more experienced parents on the app often proves invaluable.

Babyfriends is a similar app that aims to connect parents based on their location and personal situation. Parents who join the service are asked their age, neighborhood and working situation. Members then gain access to an online feed that connects them with other parents with a similar lifestyle.

“I didn’t know that a parent at home alone could spend the entire day without talking to anyone, until we had our first child,” said Babyfriends’ founder and CEO Ryu Min-hee.

“Nobody is born as a parent - you just learn to become one day by day. Babyfriends’ aim is to become a community where people can give each other guidance by sharing their personal experiences.”

Online platforms that help parents find babysitters are also on the rise, as more new parents struggle to find a balance between work and family.

In Korea, babysitting is not a common part-time job for teenagers because it would eat into the all-important study time. Most hired babysitters are in their 50s and 60s and are either introduced by a mutual friend or hired from an agency. For young parents, it’s often difficult to complain because of the babysitters’ seniority in terms of age and because there are often limited alternatives.

“Based on personal connections, it was really hard to meet a babysitter that lives in your neighborhood and agencies didn’t provide past records or reviews of their babysitters,” said CEO Chung Ji-yea of Mom-sitter.

Mom-sitter, founded in 2016, connects parents with university students that are interested in doing some babysitting. The website looks similar to a job search site, and parents can choose a babysitter based on their preferred wage, specialty and educational background.

Chung developed the business idea with her future self in mind after seeing female colleagues quit work because they couldn’t find a babysitter. The app now accepts applicants that are not students, mainly those with a government license for childcare.

“When I first started the service, I thought the babysitter’s profile -what he or she is good at or what they majored in - would matter,” said CEO Chung, who is also the mother of a four-month old baby. “But what I know now is that kids in fact are easily intrigued by anything they do with an entirely new person.” 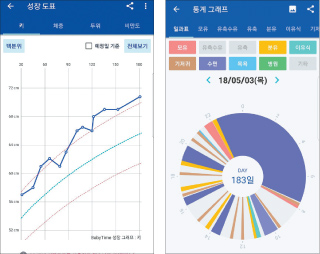 Mobile app BabyTime can collate data to show patterns in a child’s sleep, meals and diaper changes, as well as compare records with other babies the same age. [SCREEN CAPTURE]

Internet of Things technology is also making its way into baby products, with smart devices bridging the gap between newborn babies that can’t communicate and their parents.

Allb is a Korean start-up that recent took its wearable baby device to the Consumer Electronics Show 2017. The small, round device made of non-toxic silicon offers timely information on a baby’s body temperature, sleeping and breathing patterns through a mobile app.

Allb founder Joshua Kim was motivated to develop the product after his wife, a pediatrician, told him about sudden infant death syndrome (SIDS) - the sudden unexplained death of a child less than one year old. The device instantly sends alerts if a child stops breathing and detects how long the child has been lying on its belly, which enhances the possibility of breathing difficulties.

“From a medical point of view, it’s hard to definitely say that knowing when a baby stops breathing can prevent death from SIDS,” said Kim. “But babies in intensive care units are constantly monitored, and if they stop breathing, doctor or nurses rush in to help them. We rarely see babies dying of SIDS in the hospital.”

One of the most anticipated start-ups in the local baby tech scene is Monit. The company, founded by six fathers, spun off from C-Lab, Samsung Electronics’ in-house start-up accelerator. Monit’s most recent product is a diaper monitoring device that can distinguish between urine and feces. Compared to the conventional sniffing technique, a diaper monitor is much more convenient.

“Diapers today are advanced in absorbing urine, but not feces, so it is more likely to cause diaper rash,” said Park Do-hyeong, one of Monit’s founders. “Babies have incredibly sensitive skin, so if you don’t change their diapers in time, even 10 to 20 minutes can make their skin go red.”

In October, the start-up landed a partnership deal with Yuhan Kimberly to help apply Internet of Things technology to its diapers.

A saying has emerged in recent years to describe spending on baby-related products in Korea - “One baby, 10 pockets.”

More spending per baby is keeping the baby goods market thriving. A 2016 report from Yuanta Securities said that Korea’s baby product market posted 2.4 trillion won in 2015, double that of the 1.2 trillion won in 2009.

Increased spending is in part due to a growing interest in high-quality products, prioritizing quality over cost.

“The marrying age is older, which means there are more economically affluent parents. Combined with double-income households and a general rise in income, the baby goods market is showing a tendency to go more premium and professional,” said Kang Ha-young, a researcher at the Korea Consumer Agency.

Further growth potential for the market is also demonstrated by a higher level of interest from start-up investors in the sector.

Market research firm CB Insights anticipated in a September report that the number of investment deals in the industry would total 186 last year, a 57 percent increase from 2013. It also added that early-stage deals were growing, which explains the decline of investment volume last year, but also indicates that investors are making riskier bets on baby tech start-ups.

Apart from the United States, China is another country where investment in baby tech start-ups is booming. Chinese start-up Babytree, for example, secured $602 million during the first half of 2017.

“The Chinese baby goods market has huge growth potential due to the growing number of babies and a general preference for foreign premium brands,” said Song Ji-hyun, an official in the Nanjing office of the Korea Trade-Investment Promotion Agency.