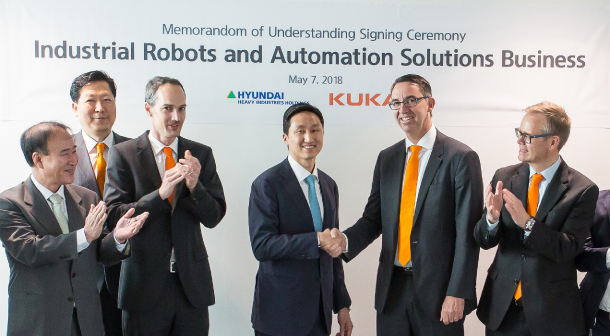 Under the memorandum of understanding signed on Monday, the Korean company will offer up its local sales network and after-sales service know-how to achieve the target by 2021. Kuka will share its expertise in industrial robot development and production.

While the Korean robot maker has the largest share of the local industrial robot market, it doesn’t have a lineup of small, lightweight robots.

A spokesperson from HHI Holdings said the partnership is expected to help the company produce a diverse range of small and large industrial robots to maintain its position as the leading Korean industrial robot manufacturer.

With more factories automating their production as part of the so-called fourth industrial revolution, demand for smarter, more sophisticated robots has grown. HHI Holdings aims to capture that market by ramping up its research and development efforts.

When it launched its plan for the future last September, HHI Holdings said it hopes to make 500 billion won ($462 million) in revenue and become one of the top five global robotics companies by 2021.

HHI Holdings said in a statement on Monday that it believes the partnership with Kuka will be an important stepping stone to upgrade its robotics technology to a world-class level.

HHI Holdings used to be called Hyundai Robotics before it changed its name in March after the group reformed its governance structure. The robot maker, which spun off from HHI Group in April last year, now functions as the holding company for the group.