Hyundai forecasts a strong comeback in sales this quarter

Hyundai forecasts a strong comeback in sales this quarter 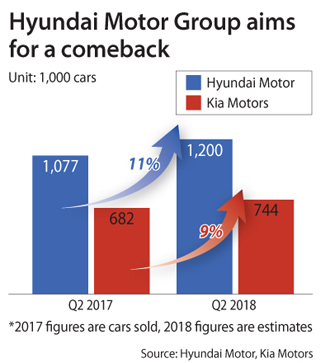 After two difficult years, Hyundai Motor Group is confident that it will sell more cars overseas this quarter - particularly in China.

Hyundai Motor and Kia Motors believe they will sell 1.94 million cars worldwide in the second quarter this year, according to industry sources. That figure is 10 percent higher than the company’s sales last year in the same period. The overseas units of Hyundai Motor and its smaller affiliate Kia Motors recently held a meeting to review their first-quarter performance and set their sales objective for the second quarter.

Hyundai Motor said it is on track to sell 1.2 million cars from April to June this year, 11 percent more than what it was able to sell last year over the same period. Kia Motors said it will sell around 744,000 units, which would be 9 percent growth.

If the automakers’ estimates are accurate, Hyundai Motor Group will achieve 5 percent year-on-year sales growth for the first half of the year. That would be a concrete turnaround from the last two years, when Hyundai and Kia sales fell.

The carmaker’s confidence in its global sales this year is backed up by its strong performance last month. 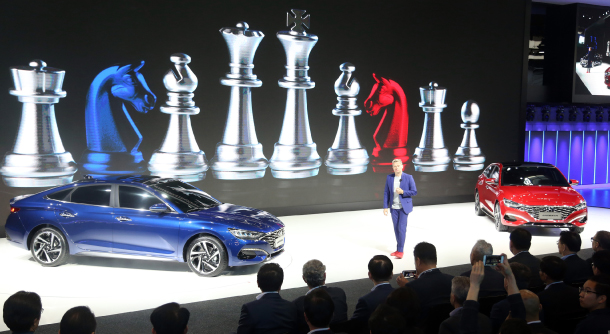 Hyundai Motor introduces its Lafesta sports sedan, which is only available in China, during the Beijing Motor Show last month. [YONHAP]

In the second quarter, Hyundai Motor and Kia Motors expect to sell 322,000 cars in China, which would be 103 percent growth from the second quarter last year. The company’s growing stable of Chinese-focused models, such as Hyundai’s small Encino SUV and Kia’s midsize Zhi Pao SUV, are propelling sales growth.

The Korean automaker’s prospects in emerging markets are also expected to be rosy this quarter.

Hyundai and Kia expect to sell 100,000 cars in the second quarter in Russia, 10 percent more than the second quarter of 2017. The carmaker plans to take advantage of the upcoming 2018 FIFA World Cup in Russia and the country’s efforts to stimulate the economy to increase sales.

Hyundai launched a special edition of its HB20 compact and a revamped version of its Creta SUV for the Brazilian market, and Hyundai and Kia expect to sell 51,000 vehicles in Brazil in the second quarter, which would be a 16 percent increase from the same time last year.

The European and U.S. markets aren’t looking quite as strong, however. Hyundai Motor and Kia Motors set a humble goal of 2 percent year-on-year growth for the second quarter in Western Europe, aiming to sell 535,000 cars. The carmakers are banking on the recently launched Kona and Stonic models as well as growing interests in eco-friendly powertrains to help European sales.

In the United States, Hyundai and Kia sales dropped 10 percent year-on-year in the first quarter this year, selling 295,000 units. The carmakers aim to limit the negative growth to 1 percent this quarter.