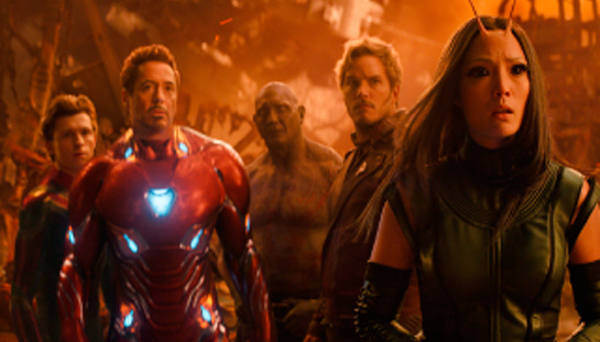 The superhero-stuffed “Avengers: Infinity War” is currently the highest-grossing film in theaters, topping the box charts in numerous countries, including Korea and North America.

In Korea, Disney and Marvel’s latest collaboration has surpassed 8 million tickets sold as of Sunday, just 12 days after its release. According to the Korea Film Council, a total of 739,244 viewers watched the film in a single day, on Sunday, May 6. Compared to April 29, that was a 10.7 percent drop in showings of the film. In the second weekend of its release, a total of 1.97 million tickets were sold, a decline from the first week but still a phenomenal number.

So far, the total number of tickets sold to “Infinity War” in Korea is 8.49 million, and the film is expected to surpass 9 million very soon.

Marvel’s latest superhero movie has broken the studio’s previous record from three years ago when it grossed $27.6 million in Korea with “Avengers: Age of Ultron (2015).”

As for North America, Walt Disney Co. said Sunday that “Avengers: Infinity War” will gross an estimated $112.5 million in American and Canadian theaters over the weekend, becoming the second-highest grossing film on a second weekend behind “Star Wars: The Force Awakens” ($149.2 million) and just slightly ahead of “Black Panther” ($111.7 million).

“We’re in uncharted territory again,” said comScore senior media analyst Paul Dergarabedian. “This is a second weekend number that many films would aspire to have on opening weekend.”

Globally, “Avengers: Infinity War” has now grossed over $1.2 billion and become the first film ever to cross the $1 billion mark in 11 days of release, and it has yet to even open in China.

But even with its high earnings, the superhero flick left room for newcomers and its competitors.

At second at the Korea box office was sports drama “Champion,” starring acclaimed actor Ma Dong-seok. Directed by Kim Yong-wan, the film sold 21,957 tickets at 839 screens over the week, and the total number of viewers so far is 701,470. This film portrays the main character’s journey to becoming an arm wrestling champion.

Ranked third to sixth were animated films, possibly because Saturday was Children’s Day, a national holiday. “Early Man,” directed by Academy Awards winner Nick Park, well known for “Wallace & Gromit,” ranked third with a total of 55,192 tickets sold, while “The Incredible Story of the Giant Pear,” a tale of an elephant named Sebastian and a cat called Mitcho, came in fourth with 3,687 viewers. In fifth was Chinese animated film “Tofu” with a total of 3,141 tickets sold, and coming in sixth was “Leo Da Vinci: Mission Mona Lisa,” a fanciful tale about Leonardo da Vinci’s childhood, with 2,541 viewers.

There was not much new competition this weekend in the blockbuster space in North America, although there were a handful of other options, like “Overboard,” which came in a very distant second to “Infinity War,” but still made a notable splash for a film its size.

Pantelion Films CEO Paul Presburger and Jonathan Glickman, president of the Motion Picture Group at MGM, both attribute the success to the star-power of Eugenio Derbez (“Instructions Not Included,” “How to be a Latin Lover”) who helped developed the bilingual remake with an American star (Anna Faris) to appeal not just to his Hispanic fan base but all audiences.

The cast, including Derbez and Eva Longoria, helped promote the film on their social media accounts too.

“It’s great to have a large base especially in the wake of ‘Avengers,’” Presburger said. “We have a movie out there that plays to families and all audiences that should have success into Mother’s Day and onwards.”

Although critics were not especially won over by “Overboard,” audiences gave the film a more favorable A- CinemaScore.

Third place went to “A Quiet Place,” which has grossed $159.9 million in five weeks in theaters, and fourth place to “I Feel Pretty,” now up to $37.8 million in weekend three. “Rampage” rounded out the top five with $4.6 million, bumping its domestic total to $84.8 million.

In sixth place, “Tully,” starring Charlize Theron, launched on 1,353 screens with $3.2 million. It’s the third collaboration between director Jason Reitman and screenwriter Diablo Cody, the team behind “Juno,” and their second with Theron, who also starred in their film “Young Adult.”

Hollywood’s summer movie season typically runs from the first weekend in May through Labor Day, but this year got a jump-start with the late April release of “Avengers: Infinity War.”

“This was not the strongest weekend ever in terms of the official kick-off of the summer season, but we could be looking at a record May ultimately,” Dergarabedian said, noting upcoming releases like “Deadpool 2” (May 18) and “Solo: A Star Wars Story” (May 25). “This weekend just shows how the strategy of release dates is changing how the box office plays out.”