North had plan if conservatives talked to Kim

North had plan if conservatives talked to Kim 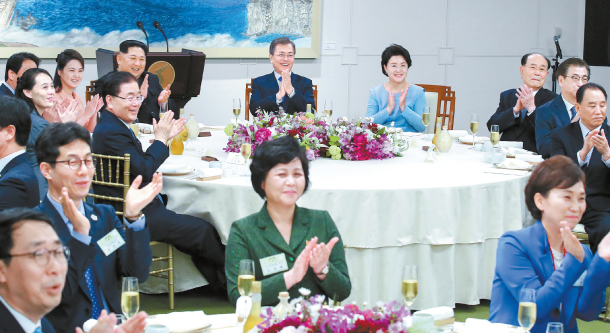 Guests from North and South Korea applaud after watching a performance at a dinner banquet held after the historic inter-Korean summit on April 27 at the Peace House in Panmunjom. Opposition party leaders were not invited. [JOINT PRESS CORPS]

North Korean officials were dismayed that no conservative lawmakers from the South Korean parliament attended the post-summit dinner banquet in April, a senior official in the ruling party exclusively told the JoongAng Ilbo on Thursday.

The guest list for the dinner included mostly lawmakers from President Moon Jae-in’s Democratic Party. Not a single representative from the conservative opposition was invited, a snub that has not only riled the conservatives but also apparently North Korea, according to the source, who spoke on the condition of anonymity.

In particular, North Korean officials appeared most disappointed that Hong Joon-pyo, leader of the Liberty Korea Party, did not attend.

The North, according to the source, meticulously planned out a scenario in case Hong approaches Kim at the banquet and makes any offensive remarks, to which Kim was supposed to chuckle and appear cool in front of cameras. In turn, Hong was meant to seem “narrow-minded.”

On the other hand, if Hong tried to build rapport with any North Korean official or share convivial greetings, the North would have been pleased with that scene as well, the source said, because Hong would then return to the National Assembly as a target of criticism from his own party.

“North Korea is trying to prepare for the future and get close with the opposition parties because they’re aware that South Korea’s Moon Jae-in and the United States’ Donald Trump will be replaced in a couple of years,” the source said. “The country is also trying to shape an environment where conservatives will have no choice but to accept the North, given how complicated South-North relations will unfold from here on out.”

There were 32 people from the South Korean side and 26 North Koreans at the banquet, which took place on April 27 at the Peace House, a South Korean-controlled building in the border village of Panmunjom. The Blue House did not invite anyone from outside the Democratic Party, except for Rep. Park Jie-won of the left-leaning Party for Democracy and Peace. The snub provided fresh fodder for conservative hawks to criticize the Moon administration and the declaration he signed with Kim at the summit.

Among the Democratic Party members who attended the banquet were Choo Mi-ae, chairwoman of the party, and Woo Won-sik, the floor leader. Another source from the Democratic Party told the JoongAng Ilbo that both lawmakers were not included in the initial guest list, but Moon ordered them to be added later on.

The issue has soured relations between the ruling party and opposition just as Moon is trying to ratify the Panmunjom Declaration in the National Assembly. The process would make the declaration legally binding and prevent future administrations from backpedaling on the agreement.

The Democratic Party does not have enough votes to pass the bill on its own. It can try to sway lawmakers in minor parties, but the Liberty Korea Party’s stark disapproval could sabotage efforts for bipartisan support.