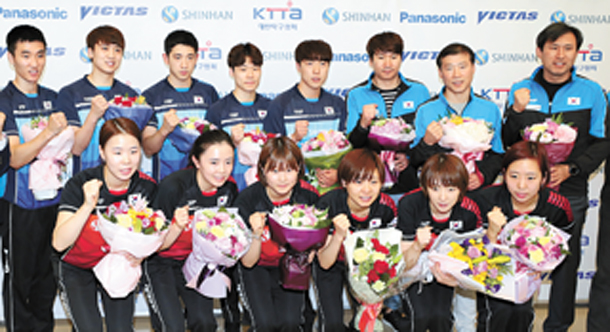 The South Korean men’s and women’s table tennis teams returned home on Tuesday after picking up bronze medals at the world championships in Sweden.

Though both teams had podium finishes, the women’s side made far more headlines last week at the World Team Table Tennis Championships in Halmstad, Sweden, where they teamed up with North Koreans for their first table tennis joint squad in 27 years.

The two Koreas were set to square off in the quarterfinals last Thursday, but they decided to join forces only hours before their showdown. They advanced to the semifinals as one team but lost to Japan to take the bronze.

South Korea is hoping to field a joint Korean team at the Asian Games in Indonesia starting on Aug. 18. It has made a proposal for the International Table Tennis Federation (ITTF) to review. South Korea wants to ensure both Koreas will retain their allotted roster spots - two players each in the men’s and women’s singles, two teams each in the mixed doubles and five players in the team event - even if they combine their squads.

At the world championships, all five South Koreans and four North Koreans were allowed to stay on the roster, and all nine players received bronze medals.

The men’s team picked up their second consecutive world championships bronze after losing to Germany 3-2 in the semifinals.

An Jae-hyung, head coach of the South Korean women’s team, said he was proud to have been a part of the historic occasion.

“I didn’t compete at the 1991 world championships [when the Koreas previously had a joint team], but I imagine those who did must have felt the same way that I do now,” An said. “If the players from the Koreas can bring out the best in one another through joint training, I think we should be able to play better.”

Kim Taek-soo, who coached the South Korean men’s team, said he was envious of how the women’s combined team had a chance to compete under the international spotlight.

“Hopefully, the men’s teams will get a chance to compete as one Korea at the Asian Games,” Kim added.

Building on the goodwill, the Korea Table Tennis Association (KTTA) in Seoul has expressed interest in participating in the Pyongyang Open tournament in the North Korean capital for the first time from June 13 to 17. The KTTA will also try to get North Korea to pay a reciprocal visit to the Korean Open in Daejeon in July.