For the first time in two seasons, the V leagues’ twin sisters - Lee Jae-yeong of the Incheon Heungkuk Life Pink Spiders and Lee Da-yeong of the Suwon Hyundai E&C - are on the national volleyball team together, hoping to win Korea’s second-straight gold medal at the 2018 Asian Games. 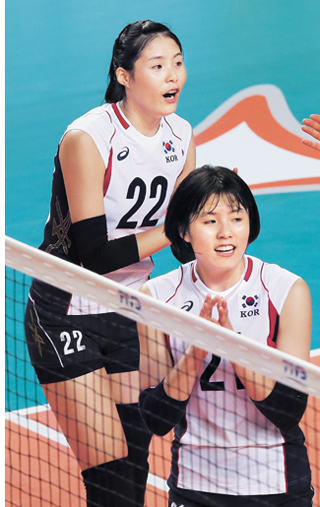 The 2017-18 season in the V league was a special year for the twins, as they were both selected among the league’s Best 7 for the first time in four years since they made their professional debut.

Though it was Lee Jae-yeong’s third consecutive year winning the prestigious award, it was the first time that Lee Da-yeong joined her.

“Even before the start of the season, I’ve been telling Da-yeong, ‘Let’s win the award together,’” Lee Jae-yeong said. “When I wasn’t playing well during the season, Da-yeong motivated me and encouraged me.”

It may have been Lee Da-yeong’s first time winning the award, but she wasn’t satisfied with her season. She felt like she had only managed to show 40 percent of what head coach Lee Do-hee asked her to do.


“I still have a long way to go because [last season] was my first time playing as a starter,” Lee Da-yeong said. “I think this is just the first step toward my goal.”

Though the sisters were both awarded for their performance last season, neither of them had an easy ride.

Lee Jae-yeong - already known as one of the best players in the league - struggled as her team was plagued with injuries and she was forced to cut short her own recovery to fill the roster. 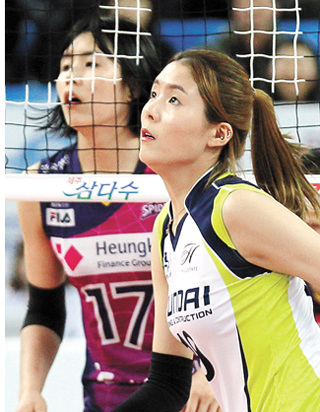 Lee Jae-yeong of the Incheon Heungkuk Life Pink Spiders, left, and Lee Da-yeong of the Suwon Hyundai E&C play against each other during the 2017-18 V league season. [YONHAP]

“To be honest, I’m still injured,” Lee Jae-yeong said. “It was the hardest time of my professional career, but I learned a lot from it. I think this is the most important time in playing volleyball.”

On the other side, once Lee Da-yeong became a starter for Hyundai E&C, she had to play through the postseason without a backup setter on the team.

“A lot of people were worried about my physical condition, but it was a good experience for me,” said Lee Da-yeong. “I just thought about being careful about the injuries.”

Just like any other siblings, the sisters also take pleasure in giving each other a hard time. As Lee Jae-yeong has more experience as a starter, she wasn’t afraid to give her sister some tough love to help her build up her confidence in the position.

The twins took their rivalry onto the court as well. Lee Da-yeong was often caught on camera celebrating after she blocked Lee Jae-yeong’s spikes when they played each other.

Though the twin sisters may be opponents in the V league, at the Asian Games they will play on the same team for the first time in two seasons. Lee Jae-yeong was selected for the national team at the 2016 Rio Olympics but Lee Da-yeong didn’t make the cut.

“It’s better to be together than just by myself,” said Lee Jae-yeong. “Until last year, I was lonely and I was the youngest [on the national team]. But now, I feel a lot more comfortable because I have Da-yeong.”

At around this time last year, Lee Jae-yeong had to drop out of the team due to injuries. Unsympathetic fans said she was selfish.

This year she has returned to the court stronger than the other players.

“Whenever I played for the national team, I was always worried about being short,” said Lee Jae-yeong. “But coach Cha Hae-won prefers fast and low volleyball. I want to show that I can still play even if I’m short.”

As Lee Jae-yeong didn’t get to play in any games during the Incheon Asian Games, she is more determined to work harder to redeem herself from four years ago.

“I think it’ll be another good experience,” said Lee Da-yeong. “I want to win another gold medal at the Asian Games.”