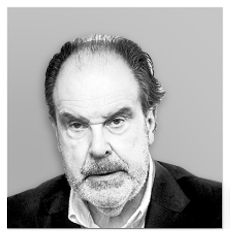 John Lloyd
*The author co-founded the Reuters Institute for the Study of Journalism at the University of Oxford.

Russian President Vladimir Putin has been mad at the West for years. Indeed, he came to office mad at the West, since he thought the collapse of the Soviet Union in 1991 was “the greatest geopolitical catastrophe of the [20th] century,” and has blamed NATO expansion for post-Cold War tensions with Russia.

Like most Russians, he blamed the liberal policies of Mikhail Gorbachev, the last leader of the Soviet Union, for much of the catastrophe. But Putin also saw the West, especially the United States, as unrelenting in its efforts to destroy the country he had been trained to both venerate and serve as a KGB officer.

Tens of millions of Russians who had moved to or were born in Ukraine, the Baltic States, Central Asia and the Caucasus found themselves, on the rending of the Soviet Union, foreigners in new nation-states. In these, they were often regarded — as in the Baltic states and Georgia — with hostility. Putin saw it as his first task to protect the country and to do what he could to protect the exiled Russians.

By his measure, he has done quite well in these tasks. He fought a savage war in the Caucasian republic of Chechnya to stop it from breaking away from Russia, and installed a dictator in the country beholden to him for his power. He swept aside Georgian attempts to take back its northern province of South Ossetia and had his troops drive up to the capital, Tbilisi, to show they could snuff out Georgian independence, before pulling them back. He invaded the Ukrainian province of Crimea, inhabited mainly by Russians, and declared it part of Russia. He sponsored, and sponsors still, mainly Russian rebels in Eastern Ukraine in a war that continues, draining away Ukrainian resources and statehood.

Meanwhile, his reasons for hating the West have become the constant tropes of Russian propaganda, domestic and foreign. The West has expanded NATO up to the Russian borders, after promising not to. (On that claim, Putin has half a point.) The West bombed Serbia, Russia’s longtime ally. (It did to prevent worse bloodshed in Kosovo.) It invaded Iraq, bombed Libya. It supports Ukraine against Russia. It finances Western NGOs and institutes (many of which have been designated as “foreign agents”) in Russia which allegedly oppose his rule and seek to overturn it. (Disclosure: I am chairman of one such NGO, designated a “foreign agent.”)

This is a large charge sheet, and it is still longer than that. It justifies, in Putin’s and many Russians’ minds, retaliation. But what form does that take?

It has become clear in the past few years that the Russians (and others, such as the Chinese, typically more cautiously and delicately) are seeking to become experts in hybrid warfare, with a heavy reliance on the internet and social media. At an event in London earlier this week hosted by the monthly magazine Prospect, one of the U.K.’s spymasters and a security world intellectual, Sir David Omand, spoke of present and future ways of waging war — warning that they were both harder to counter and more fraught with danger than at the time of the Soviet Union.

This is because of the nature of the internet, and the capacities of social media. Both had been advertised as benign, capable of opening the world to human curiosity in an unprecedented way, linking person to person and nation to nation. Bill Clinton, when president, lauding the world-changing potential of the internet, said that seeking to stop it was “sort of like nailing Jell-O to the wall.” The Chinese and the Russians took note of that, and both succeeded in nailing the Jell-O and turning it against the inventors. As well as its benign, mind-expanding effects, the online world, we have learned, is the haunt of criminals, con men, pederasts, hate-filled obsessives, liars and various sorts of powers, among which are powerful states who use it for their own ends — including to wage a new kind of war.

The underlying problem is, as Omand remarked, that the internet’s business model is us. We, who use the internet usually with neither training nor care, blithely give over vast quantities of information to corporations, to criminals and hostile states who then use it to do harm to us and our countries and our democratic habits.

The extent, or possibility, of other attacks on governments and elections — in Germany and, most famously and apparently most thoroughly, in the United States — are still being investigated. Fake social media messages aimed at securing the Brexit result in the U.K.’s 2016 referendum on membership of the European Union is also suspected, with the Russians again in the frame. Ciaran Martin, head of the U.K.’s National Cyber Security Centre, said that over the previous 12 months, Russian hackers have tried to attack the British energy, telecommunications and media industries. Prime Minister Theresa May, in a speech, said that Russia was threatening “the international order on which we all depend.”

May’s remark makes clear the scale of the issue. Computer hacking, once considered a game, now digs away at the already weakened foundations of our liberal democracies. In the hands of hostile states and organizations, it is used to spread lies about governments, political issues and parties. It takes away what is a necessary condition of a democratic people — the ability to make up one’s own mind after considering the evidence.

The joy of the internet — which remains — is thus deeply compromised. We need protection against such foul play — but also need to protect ourselves, by seeking education, learning proper skepticism and understanding what distinguishes false news and propaganda from facts and honest opinion.