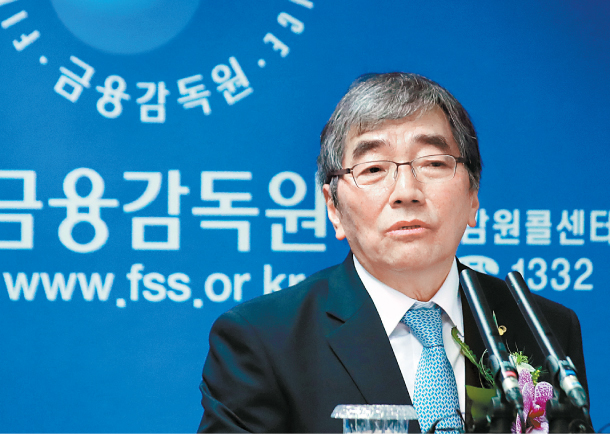 Yoon Suk-heun, new governor of the Financial Supervisory Service (FSS), talks at a press conference on Tuesday at the FSS headquarters in western Seoul. [YONHAP]

Yoon Suk-heun, the new governor of the Financial Supervisory Service (FSS), vowed to strengthen the agency’s independence as the watchdog of the financial industry.

“Our job is to ‘supervise’ [activities in the financial industry] and to carry this out properly, we must maintain our independence,” said Yoon during an inauguration speech at the FSS headquarters in Yeouido, western Seoul, on Tuesday.

“[In the past] the Financial Supervisory Service got shaken from external demands and was unable to carry out its duties autonomously…failing to fulfill its role as the ‘country’s [financial] risk manager.’”

Yoon, who was a visiting professor of economics at Seoul National University, cited the country’s snowballing household debt - which he described as a threat to the national economy - as an example of the watchdog failing to do its job.

Yoon is blaming the FSS for failing to speak out against government measures in 2014 to raise the cap on loan-to-value and debt-to-income ratios to make mortgages more accessible to the public and boost the real estate market.

“We must do our job in risk management…and press on the brake when necessary,” he said. “Only when risks are managed properly can the government implement straightforward policies and financial companies do their best to develop and innovate financial products and services to ultimately benefit the consumers.”

Yoon has been known for his stance against revisions to the so-called banking act that are meant to make it easier for internet-only banks to raise capital.

The banking act is intended to separate banking from commerce and keep non-financial companies from holding more than 10 percent of a financial company. The law keeps KT and Kakao, tech companies that led consortiums to create K-bank and Kakao Bank - the country’s first and second internet-only banks - from becoming the largest shareholders of the banks.

In a policy recommendation made last December to the Financial Services Commission, Yoon said, “While it’s important to invest in fintech, [the government] must be cautious in connecting this to internet-only bank.”

Under Yoon’s watch, local financial companies are expected to face some pressure to overhaul their governance structures.

Yoon said in the policy recommendation last year that financial holding companies should include union-nominated members on their board of directors in order to increase the clout of the unions. He’s also objected to governance structures that allow chairmen to repeat their tenures.

His remarks Tuesday also raised the possibility of some tension between the FSC and the FSS.

Yoon spoke out against the FSC when it was first established in 2008, saying that it would undermine the supervisory function [of the FSS]. Also in a proposal made in 2013, Yoon and other academics recommended that the FSC be dissolved and its key functions split between the Ministry of Strategy and Finance and the FSS.