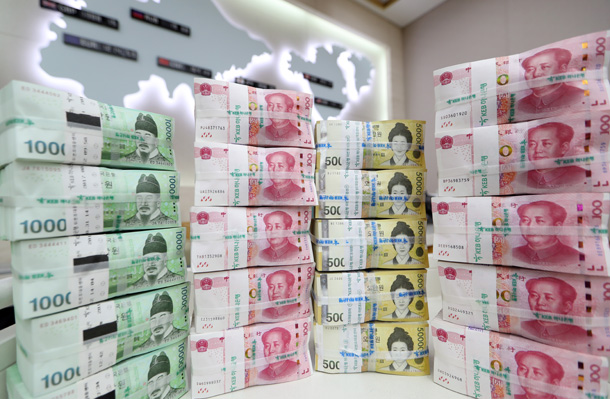 The first currency swap that Korea made was the $2 billion deal with Japan in 2001, which grew to $70 billion by 2011. However, as currency swap contracts expired one after another following former President Lee Myung-bak’s controversial visit to the Dokdo islets in 2012, they were not extended. All swaps expired in February 2015.

A currency swap is a system of exchanging the principal and interest of a loan in one currency for another. The most dramatic currency swap was the Korea-U.S. swap in late October 2008 during the global financial crisis. The financial market was fluctuating when the Bank of Korea lowered the interest rate by 0.75 percent, but the currency swap with the United States instantly stabilized the market. The value of the Korean won surged by 177 won ($0.16) in a day and the stock market soared by 12 percent.

Finance Minister Kang Man-soo played a key role in signing the currency swap with the United States. He convinced Washington of side effects, such as the “reverse spillover” in which emerging economies use foreign currency reserves to defend themselves from international financial uncertainty triggered by a developed country. Kang also persuaded Washington that the United States and other developed economies would also suffer if emerging economies start selling U.S. treasury bonds. As the United States had already signed currency swaps with Australia, Denmark, Norway and Sweden, Korea had easier access to the swap with the United States. Eventually, Korea, Brazil, Singapore and Mexico were included in the dollar umbrella.

Lately, the currency values of emerging economies such as Argentina, Brazil and Turkey have plummeted as foreign funds have been leaving as a result of interest rate hikes in the United States. Argentina even raised its interest rate three times in a week by 12.75 percent, but could not prevent the peso from falling. Unlike countries with trade and fiscal deficits, Korea has solid economic fundamentals and a stable financial market.

But we cannot be at ease. Kim Ik-ju, who was the head of the Korea Center for International Finance, wrote a column titled “Why we need to be modest before the international financial market” in 2013, in which he argued that a crisis often spreads because of excessive volatility.

Korea cannot remain a spectator. Last week, Bank of Korea Gov. Lee Ju-yeol mentioned a possibility of reopening a currency swap with Japan. Restoring the currency swap with Japan despite discord is certainly possible considering the changed situation in East Asia after the inter-Korean summit. Hopefully, the Korea-China-Japan summit and the Korea-Japan summit in Tokyo on May 9 would serve as an opportunity.