Accessorize those carnations with a box of cash

Accessorize those carnations with a box of cash 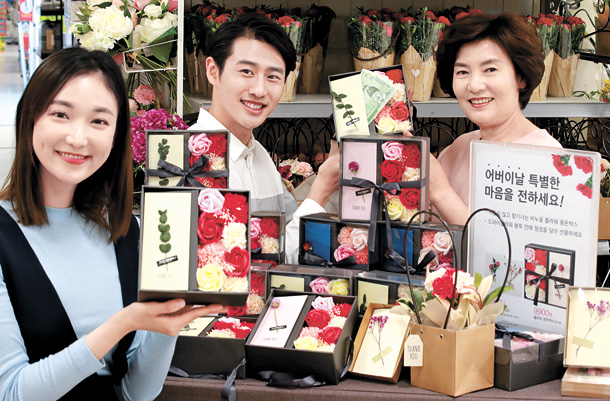 Models present flower-cash gift boxes at the Yongsan branch of Emart in central Seoul on May 4, ahead of Parents’ Day, which fell on Tuesday. Cash boxes were the most popular gift item for Parents’ Day this year. [YONHAP]

Gone are the days when you could simply give a bunch of carnations to your mother and father on Parents’ Day. The latest fashion is giving both carnations and cash - in a box.

According to big data analysis from SK Telecom, the most popular keyword regarding Parents’ Day presents was “cash box.” The box, sold at online flower shopping malls and offline stores, has two separate sections in it. One section holds the carnations, while another smaller section holds an envelope containing cash. Some people go a step further, rolling 10,000 won ($9.27) or 50,000 won notes into tiny cigarette-sized tubes and filling the cash section with them.

“It’s too simple just to give cash,” said Cho Sung-yoon, an office worker in her 30s, “I see a lot of friends of mine ordering or making their own flower-cash box for their parents this year.”

According to Coocha, a mobile shopping platform, searches for the keyword “cash box” shot up more than five times in the first week of May.

The two weeks from April 20 to May 3 saw sales of cash boxes soared 40 percent year-on-year at 11st, another online shopping mall. Some popular sellers within the platform saw revenue during the period skyrocket 1,700 percent on-year. This year’s Parents’ Day was particularly popular as it fell just after the long Children’s Day holiday.

SK Telecom’s analysis of 57,186 news articles, blogs and community bulletins from the beginning of this year until April 15 showed that each year’s Parents’ Day has a different gift trend.

Last year, 24-karat gold badges or embroidered badges taking the shape of a carnation were popular presents. In 2016, children preferred giving flowers made out of soap or diffusers instead of real flowers.

Gifts varied between mother and father, according to the mobile operator that has been increasingly mobilizing artificial intelligence in big data analysis.

For mothers, other popular presents included beauty products and health supplements. For fathers, health supplements were most popular. This year saw keywords on electric appliances and furniture also on the rise.