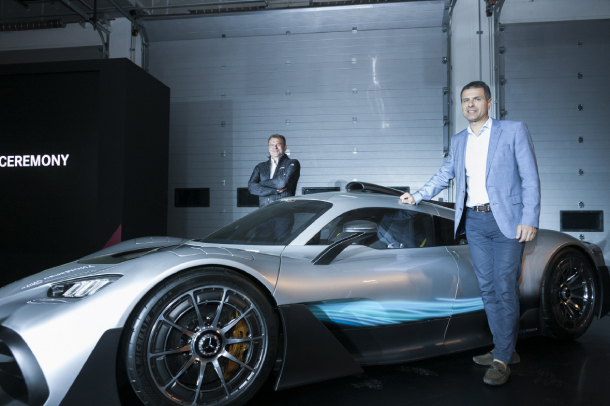 Tobias Moers, chairman of the board of management at Mercedes-AMG, left, and Dimitris Psillakis, CEO of Mercedes-Benz Korea, pose with the Mercedes-AMG Project ONE on Tuesday at the opening event of AMG Speedway in Yongin, Gyeonggi. [MERCEDES-BENZ KOREA]

YONGIN, Gyeonggi - There aren’t many opportunities in Korea to put pedal to metal and let a car show what it’s got - especially a car capable of real, high-performance speed.

A rebranded test drive track in Yongin, just one hour drive from central Seoul, is probably the best place for pure driving speed.

Mercedes-AMG collaborated with Samsung C&T to rebrand what was formerly known as the Yongin Speedway, the country’s first speed track, built in 1992. The 4.3-kilometer (2.6-mile) race track is now dedicated to test drives of AMG vehicles, Mercedes’ high performance brand.

“Korea has been contributing to the growth of Mercedes-AMG significantly, while emerging as a major market for the high-performance vehicle segment,” said Tobias Moers, chief executive of Mercedes-AMG, in his first public visit to Korea Tuesday for the opening of the race track. “In this sense, I am pleased to open the first racetrack bearing the name in Korea, where visitors can explore Mercedes-AMG’s motorsport DNA.”

A total of 3,206 AMG vehicles were sold in Korea last year, which signified 56 percent year-on-year growth. This exceeds AMG’s average growth in the global market, which was 33 percent last year.

Mercedes-Benz Korea will use the track to promote the AMG brand as well as the auto-racing culture in Korea.

The track will host launch events for AMG and Mercedes-Benz models in the future. The German carmaker plans to bring some 20 new AMG cars to Korea this year including the E63 S, CLS 53 and GT 4-Door Coupe.

Visitors can test drive AMG vehicles on the course, experiencing the cars’ various features and feeling their performance. There will be exclusive benefits for actual AMG owners, such as a pass to use the AMG Lounge and AMG Exclusive Pit Stop.

People interested in motorsports can apply for the AMG Driving Academy, where professional racers will run programs for beginners and experienced drivers from next autumn. The programs are developed by the German headquarters.

Mercedes-Benz Korea is, in fact, not the pioneer in test-drive tracks in Korea.

BMW Korea built its BMW Driving Center in Yeongjeong Island in 2014, which is equipped with a 2.6-kilometer driving track and other facilities such as restaurants, a lounge and a gift shop.

“The profile here is more on racing,” he said. “Also, the track is closer to the city center.”

Mercedes-AMG plans to double the number of Mercedes-AMG Performance Centers equipped with dedicated showrooms from 6 to 12 by the end of this year.

At the Tuesday event, Mercedes-Benz Korea unveiled the new Mercedes-AMG GLC 63 S 4Matic+ Coupe as well as the Mercedes-AMG Project ONE.

The AMG Project ONE, which was premiered at the 2017 Frankfurt Motor Show, is a two-seater sports sedan with a plug-in hybrid powertrain. It was meant to commemorate AMG’s 50th anniversary. The AMG GLC 63 S 4Matic+ Coupe is a high-performance SUV which boasts 510 maximum horsepower with a 4-liter V8 bi-turbo engine.