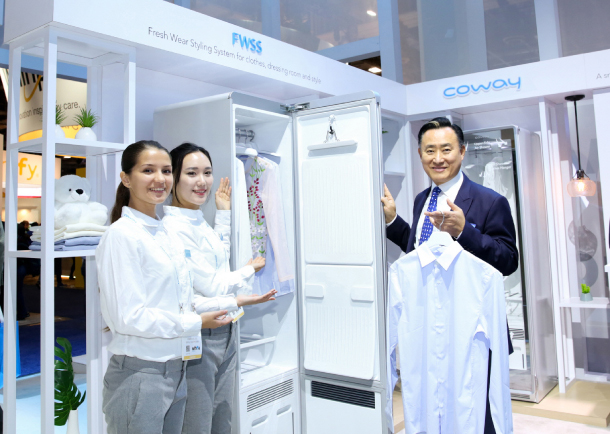 Coway’s sales in the first quarter of this year rose 6.2 percent over the same time last year to 647.8 billion won ($600.5 million), while its operating profit and net profit jumped 8.6 percent and 26.2 percent respectively. The company’s sales and operating profit were the highest in its history.

Coway’s record sales can be found in “achieving the biggest sales volume in the first quarter of this year.” Since Coway focuses on environmentally friendly home appliances which require ongoing servicing, the core of the company’s business is appliance rentals.

In 2017, the rental business made up 80 percent of the company’s sales volume, 4.5 times higher than direct sales, which made up 18 percent. The increase in rental revenue was the most important factor behind Coway’s sustainable growth.

The positive results from this quarter are promising because Coway achieved it in a competitive sector where others are trying to increase their market share.

To keep up with tough competition, companies have to expand into new product categories.

Water purifiers were Coway’s main business when the company was founded in 1989. However, as the company grew, new products were needed, and Coway rolled out air purifiers in 1994 and bidets in 2002.

Coway is planning to continue to release new products in 2018. It has already announced plans to launch its Fresh Wear Styling System soon. This product will clean clothes, including suits, coats and knits, which are hard to wash. It also completely eliminates dust and odors and protects clothes from wrinkles. The product received the Innovation Award at the Consumer Electronics Show in Las Vegas, the world’s biggest home appliance exhibition.

“Coway’s move toward a consumer-oriented business produced great results in the first quarter. The company will sustain its growth by moving into new product categories in the second quarter,” said Lee Hae-sun, Coway’s CEO.