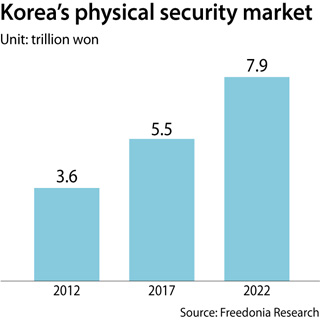 The Korean carrier announced Tuesday that it will inject 702 billion won to secure a controlling 55 percent stake in Siren Holdings Korea, which has full ownership of ADT Caps. Macquarie Infrastructure and Real Assets, an infrastructure asset management unit under Australia’s Macquarie Group, will invest 574 billion won to take the remaining 45 percent.

The two purchasers valued ADT Caps’ business at roughly 2.97 trillion won, according to SK Telecom. On top of the 1.28 trillion won to be paid, the security firm carries 1.7 trillion won in debt.

Considering major security companies are typically valued at about 11.7 times their earnings before interest, taxes, depreciation and amortization in the global market, the telecom company said their valuation was made at a similar level.

The transaction could be completed by the third quarter of this year.

ADT Caps is the second-largest company in the local physical security market, with about a 30 percent market share, or 570,000 subscribers. Physical security refers to security measures designed to prevent unauthorized access to facilities, equipment and resources and to protect people and their properties from damage.

Surveillance cameras with IoT sensors can more easily detect emergency situations when they sense heat or vibrations, and security staff can even limit potential danger before it has happened using big data analysis and AI projections. Security system operators can also cut costs due to more accurate warnings and prevention, according to the mobile carrier.

Protecting children that are home alone waiting for their parents or monitoring the health conditions of elderly people living alone are among the new services being considered. The carrier believes such services will be possible by coupling multiple security measures like surveillance videos, heat detecting sensors and AI.

For enterprises, SK Telecom is also considering using drones to monitor a vast area around their manufacturing facilities.

“The high-tech security service market is still a blue ocean and the next generation growth engine [for our company],” a spokesperson from SK Telecom. “We plan to make ADT Caps a firm that makes over 1 trillion won in revenue by 2021.”

SK Telecom said global tech giants Google and Amazon have already jumped into the security business and it is important that Korea take leadership in the area. It further added that it plans to actively support local start-ups in the sector to expand the size of the local physical security market.