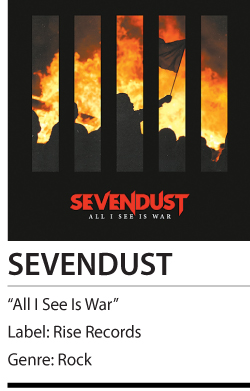 There are some people who sneer at hard rockers Sevendust, expressing dislike for the metal band for its lighter tones and stylistic changes. To which we respectfully say: Blow it out your ears.

The Atlanta-based metal-heads are back with “All I See Is War,’’ their 12th studio album. It’s filled with Sevendust’s typical blistering hooks, driving grooves and infectious choruses, knitted together by Lajon Witherspoon’s envious vocals and Morgan Rose’s sharp tat-tat-tat drumming.

“All I See Is War’’ is a follow-up to 2015’s “Kill the Flaw,’’ which garnered the band a spot on the upper third of the Billboard 200 and a Grammy nomination for best metal performance.

This time, Sevendust are more in the hard rock category. Much of the new album could easily fit on a Foo Fighters’ CD, including most of the second half’s songs - such as “Not Original’’ “Descend’’ and “Life Deceives You,’’ songs rooted in bluesy or progressive rock. So hate on them if you want, but the band does what it wants and deserves as many ears as possible. After a dozen albums, Sevendust has earned respect.