Kim Jong-un may be meeting Xi in Dalian

Kim Jong-un may be meeting Xi in Dalian 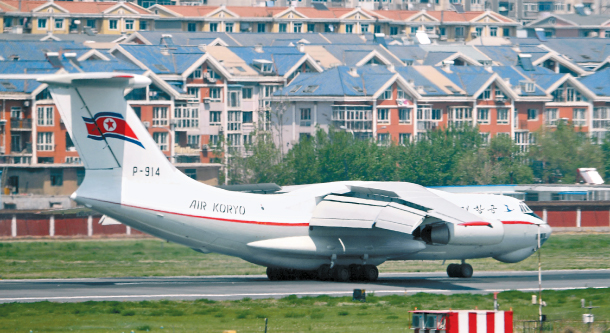 A North Korean Air Koryo plane is spotted at an airport in Dalian, China, Tuesday. [YONHAP]

North Korea leader Kim Jong-un was suspected to be on his second visit to China to meet with Chinese President Xi Jinping, a meeting with keen significance ahead of a planned historic summit between Kim and U.S. President Donald Trump.

Pictures and posts about heightened security in the eastern Chinese city of Dalian, 360 kilometers (223.6 miles) west of Pyongyang, the North Korean capital, circulated on Chinese social media sites on Monday and Tuesday. Those security conditions were reminiscent of what the Chinese authorities put in place for Kim’s three-day visit to Beijing via train from March 25 to 28.

China remained silent Tuesday on whether Kim made the trip. Its foreign ministry refused to answer the question, only saying the two nations were maintaining ties as close neighbors as usual.

The Blue House did not confirm the report Tuesday but said it was “keeping a close watch” on the situation in the Chinese port city. Seoul’s Foreign Ministry neither confirmed nor denied reports, saying it had nothing to say since there was no official announcement from Beijing or Pyongyang.

If Kim did make the trip, his travel is expected to be made public after his return home as was the case in March. It was only after his return on March 28 that both China and North Korea confirmed Kim’s Beijing trip and meeting with Xi.

The reported visit comes at a sensitive time as North Korea and the United States are in talks preparing what will be the first meeting between the leaders of the two countries.

It also comes amidst growing questions and concerns over a possible dispute between Pyongyang and Washington over denuclearization measures that the latter demands of the former in return for sanctions relief.

A delay in announcing a date and location for the Kim-Trump meeting may suggest disagreement between the two countries. An announcement on the date and venue of the summit was expected to come out by last Friday or over the weekend. Trump said last Tuesday that the decision would be made public “over the next couple of days.” He said Saturday his team had “the time and place all finished” and only the official announcement needed to be made.

North Korea’s criticism of the U.S. on Sunday also raised speculation that the two sides have locked horns over an agenda. The North on Sunday accused the U.S. of aggravating and “provoking” the country, citing Washington’s assertion that Pyongyang came to the April 27 inter-Korean summit because of its maximum pressure campaign and sanctions. “This act cannot be construed otherwise than a dangerous attempt to ruin the hardly won atmosphere of dialogue and bring the situation back to square one,” the North said in the state-controlled Korean Central News Agency.

The delay in the summit announcement comes on the heels of a slight shift in Washington’s tone about the North’s denuclearization. Moving from its previous policy that denuclearization must be complete, verifiable and irreversible, known by the acronym CVID, Washington has in recent days been calling for PVID: Permanent, verifiable and irreversible dismantlement of North Korea’s nuclear arsenal. That suggests more stringent requirements that will ensure North Korea loses any future ability to possess a nuclear weapon.

That would require inspection and closing down of all nuclear-related sites and disposal of all nuclear-related materials. The question of what to do with numerous scientists and researchers involved in the nuclear weapon program, who can number in the thousands, could be a central point to discuss under the PVID framework.

The phrase PVID was first brought up by U.S. Secretary of State Mike Pompeo in his swearing-in ceremony on May 2. John Bolton, a hawkish White House national security adviser, echoed that phrase, agreeing with his Japanese counterpart Shotaro Yachi on Friday on the “complete and permanent dismantlement of North Korea’s weapons of mass destruction.” North Korea may have been caught off guard by what it perceived to be excessive demands from the U.S., which also wants it to give up its ballistic missile technology and biochemical weapons.

Bolton said in an interview with CBS News airing Sunday that Washington would discuss issues on top of denuclearization such as “ballistic missile programs, their biological and chemical weapons programs, their keeping of American hostages, the abduction of innocent Japanese and South Korean citizens over the years,” a list of issues that Pyongyang could consider too much, especially ballistic missile programs that include short- to medium-range missiles that could hit Japan.

“If Kim did make the trip and met with Xi, he probably did that to ask for China’s mediation in the Kim-Trump talks,” he said. “The two are likely to have discussed ways to transport the North’s nuclear and long-range missile stockpiles to China as part of dismantlement as well as ways to strengthen bilateral military ties to compensate for the North’s security anxiety caused by its nuclear program termination.”