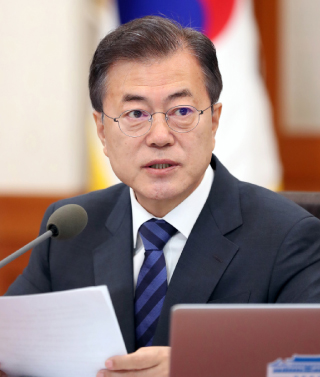 President Moon Jae-in on Tuesday encouraged resumption of dialogue between Pyongyang and Tokyo, adding that North Korean leader Kim Jong-un had expressed his willingness to do so.

Moon gave an exclusive interview to the Yomiuri Shimbun Tuesday, his first with Japanese media as president, ahead of his first visit to Japan since he took office one year ago. He said normalization of diplomatic relations between North Korea and Japan, “will greatly contribute to the peace and stability of the Korean Peninsula and the Northeast Asian region.”

Moon added that Kim discussed relations with Japan during the inter-Korean summit held on April 27 in Panmunjom, the truce village bordering the two Koreas.

According to a transcript of the interview released by the Blue House, Moon said he conveyed to Kim during the summit that Japanese Prime Minister Shinzo Abe “has the intention to normalize diplomatic relations between North Korea and Japan, based on a settlement of the issues of the past.” Kim “revealed a willingness to speak with Japan at any time.”

Moon said that the North Korean leader “clearly understands what the international community demands” and added that he got the impression during their talks that Kim was “very frank and practical.

“We confirmed the joint goal of the complete denuclearization of the Korean Peninsula,” Moon said, referring to the April 27 Panmunjom Declaration. He added that Kim declaring he will shut down a nuclear test site in May and show the process to outside observers is a “meaningful step” toward denuclearization.

Moon added that he plans to do all he can to “strengthen trust between North Korea and the United States” and to cooperate with key related countries, including Japan.

Moon is scheduled to hold a trilateral summit with Japanese Prime Minister Abe and Chinese Prime Minister Li Keqiang in Tokyo on Wednesday. This meeting comes on the heels of the inter-Korean summit and ahead of a planned summit between North Korean leader Kim and U.S. President Donald Trump, which Moon called “a historic opportunity that cannot be missed.”

In the interview, Moon added that he “looks forward to Japan’s active support and cooperation for the success of the North Korea-U.S. summit and for the establishment of permanent peace on the Korean Peninsula.”

Japan plays a “very important role for the peace and prosperity of the Korean Peninsula,” Moon said, adding there are many aspects including “cooperation between South Korea, the United States and Japan to achieve complete denuclearization, and to normalize relations between North Korea and Japan to guarantee the security of the North Korean regime.”

Moon also said he will continue to cooperate with Tokyo to help resolve the issue of Japanese nationals abducted by North Korean agents in the 1970s and 1980s.

Moon emphasized again his two-track approach to relations with Tokyo to advance South Korea-Japan relations “regardless of history issues.”

The president also addressed the issue of the Japanese military’s forced recruitment of young women into sexual slavery during World War II. He has been critical of a controversial bilateral deal struck by the previous government on Dec. 28, 2015, which included a Japanese government apology and a multimillion-dollar fund for the so-called comfort women victims. While concluding the agreement was flawed and insufficient, the Moon administration has stopped short of scrapping or renegotiating it.

“It is difficult to restore the dignities of individual victims, including those of the Japanese military’s wartime sexual slavery, and completely heal their hearts simply through a pact or agreement between governments,” said Moon, adding that “sincere self-reflection and apology from the heart has to be conveyed to the victims and accepted.”

He added that only by looking at history squarely and through joint efforts to learn from the past in order to prevent a reprise of such horrendous events can the victims’ scars be healed and true reconciliation be made possible. Building a future on that kind of foundation, Moon said, will bring about a “complete solution to the history issues.”

The trilateral summit marks the seventh such three-way meeting since the first in 2008, and Korea, Japan and China have taken turns hosting the three-way meetings. The three leaders are expected to come up with a joint statement that addresses the Panmunjom Declaration and North Korean denuclearization.

Tokyo has been expressing a hard-line stance toward Pyongyang, and in turn, North Korean state-media has been criticizing Japan over the past three days for attempting to sour improved diplomatic relations following the Moon-Kim summit last month.

Kono reportedly told the Japanese Diet’s upper house there should be “no reward” for North Korea’s words alone and that sanctions on Pyongyang should not be lifted until North Korea shows concrete action.