20 patients poisoned by doses of propofol

20 patients poisoned by doses of propofol 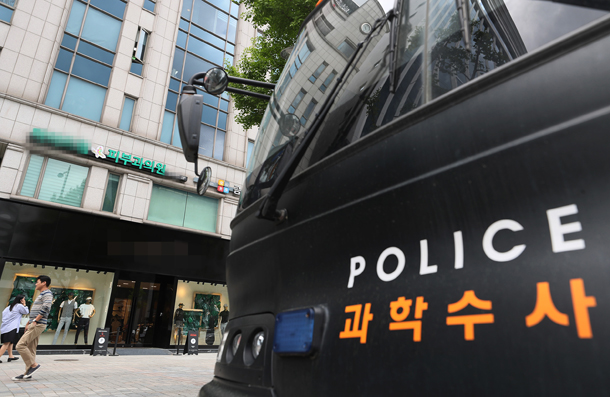 A vehicle of a forensic team of Seoul police on Tuesday sits in front of a cosmetic surgery clinic in Gangnam, southern Seoul, whose 20 patients were hospitalized for blood poisoning after receiving procedures. [YONHAP]

Twenty people who were injected with propofol at a cosmetic surgery clinic in Gangnam, southern Seoul, on Monday were hospitalized for blood poisoning.

“The 20 patients received propofol shots for procedures on their skin,” said a police officer. “We are investigating the case to see if the clinic properly managed the use of the drug.”

Propofol is a powerful anesthetic and memory loss agent that can be fatal in large doses. It was the drug that killed Michael Jackson in 2009. In 2015, a Korean woman was injected with tainted propofol during a cosmetic surgery procedure at a clinic in Gangnam, which led to septic shock and her death.

According to authorities, 21 patients at a clinic in Gangnam received propofol shots for cosmetic procedures between 12 p.m. to 3:30 p.m. on Monday. Of them, three first showed signs of blood poisoning from around 8 p.m., and the clinic, after sending the three to hospitals in the vicinity, reported the situation to the police.

Eventually, a total of 20 patients showed signs of blood poisoning and were hospitalized at six different hospitals across Seoul. None of their conditions are life-threatening, authorities said.

“We think the propofol may have been tainted,” said an employee of the clinic in Gangnam.

Police inspected the clinic on Monday and again with the Korea Centers for Disease Control and Prevention and National Forensic Service on Tuesday for an epidemiological survey.

“We will be questioning the medical staff about the use of propofol shots and more,” said a police officer.

“The authorities should be examining if the injected drug was tainted,” said Lee Jae-gap, a professor of infectious diseases at Hallym University Medical Center in Anyang, Gyeonggi. “It could have been tainted in the manufacturing process or while the medical staff was handling it.”