The ninth annual Yumin Awards were held at the Korea Chamber of Commerce and Industry building in central Seoul on Tuesday, where the Korean women’s curling team, composer Ryu Jea-joon and Park Yong-keun, professor of biomedical optics at KAIST, were recognized for their role in advancing Korea on the international stage. 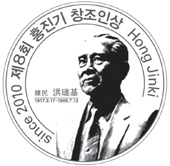 The awards are given in the fields of science, society and culture to individuals or groups who boosted Korea’s international image through their innovations.

The Yumin Awards were established by the nonprofit Yumin Cultural Foundation in 2010 in memory of Hong Jin-ki (1917-86), co-founder and former chairman of the JoongAng Ilbo, who was active in government, business and media.

“Distinguished from existing prizes that award achievements of generations past,” said former Prime Minister Lee, “this prize focuses on the younger generation’s future possibilities in the transformation of human civilization.”

The Korean women’s curling team made history with their silver medal win at the 2018 PyeongChang Winter Olympics in February, placing Korea on the map for the sport.

The five members of the team - Kim Yeong-mi, Kim Eun-jung, Kim Seon-yeong, Kim Kyeong-ae and Kim Cho-hi - and their coach Kim Min-jung were winners in the social category of the Yumin Awards for their role in spreading interest in curling and marking Korea’s presence in the sport internationally.

Before the Olympics, curling was known as a “weird sport that utilizes a broom and a rock on the ice.”

Since the Olympics, the sport is no longer considered exotic.

Though the team lost the gold medal game 8-3 to Sweden, their dramatic win against Japan during the semifinals captured the hearts of Korean spectators. The team was tied with Japan up until the end, winning the match 7-6.

“In Korea, curling was basically the equivalent of a wasteland,” said Kim Eun-jung. “But as we became one as a team, many Koreans encouraged us. After having to explain what curling was for over 10 years, I never imagined we would receive this much love.”

Kim Seon-yeong says many people recognize her after the games, and even had a fan in Canada drive three hours to watch the team’s match at a women’s curling championships in March.

“During our championships in Canada last March, a Korean fan living overseas told me that she was proud to be Korean because of our national team,” said Kim Seon-yeong.

The team started curling as a hobby in 2006 when Korea’s first curling club was started in Uiseong County, North Gyeongsang.

Kim Yeong-mi first suggested to Kim Eun-jung that they start curling after school. Later, Kim Kyeong-ae, Kim Yeong-mi’s sister, joined the team after she visited the two at a curling center. Kim Seon-yeong was the last Uiseong-based member of Team Kim to join, when Kim Kyeong-ae wrote on a board in her classroom saying, “Anyone interested in curling?”

“At the 2022 Beijing Olympics,” said Kim Kyeong-ae, “I want to smile brightly with a gold medal around my neck.”

Rising to prominence with his Violin Concerto No. 1 and “Sinfonia da Requiem” in 2008 at the Ludwig van Beethoven Music Festival in Poland, where he received a standing ovation, composer Ryu Jea-joon made his presence known to the international community ? and making Korea’s mark in the field of contemporary music.

He is currently the artistic director of the Seoul International Music Festival and Ensemble.

After graduating from high school, Ryu had the opportunity to learn composition under Polish composer Krzysztof Penderecki while he studied in Warsaw.

But his meeting with the renowned composer got off to a rough start.

“I was immediately dismissed by Professor Penderecki the first time I asked him to be my mentor,” Ryu recalled. “With no preparation, I just went to Poland to learn about new music. He asked me what a counterpoint meant to me and I was stuck. He cut me off there.”

Counterpoint is the relationship between voices that are harmonically interdependent yet independent in rhythm and contour.

It wasn’t until the third meeting that Penderecki agreed to mentor him, after Ryu told him that counterpoint signified a story.

“To me, counterpoint is a story,” said Ryu. “Music has to touch people who hear it. It is enough for me if my music encourages and motivates even just one person who listens to it.”

“Nowadays, music is so detached from people,” the composer said. “There’s no music for the people. Artists need to start by looking at the people around them.”

With mainstream music taking the limelight today, Ryu believes the power of the classics and the foundation of music is waning. But as a recipient of the Yumin Awards, Ryu sees his achievement as a message of hope to rejuvenate the classics and encourage performers and artists in his field.

“It would be wonderful if other artists and performers not in the mainstream see the light of hope as I receive this award,” Ryu said.

His only regret is that he wasn’t awarded sooner, when he wasn’t battling lymphoma, a type of cancer.

“I wish I was awarded the prize before I fell sick,” said Ryu. “I would’ve been happier if I was able to receive the award when I was producing music at my best. It would’ve been of great help if I won the award when I was running around here and there to make sure I wasn’t evaluated poorly by the Park Geun-hye administration, or worry about getting my funding cut by the Arts Council Korea.”

“Many people ask why my new pieces are so sad,” explained Ryu. “I want to overcome an illness that’s eating up my body, and create music that make the youth feel at peace when they listen to it. That’s my biggest motivation to survive.”

Imagining the possibility of trying to capture the image of the inside of a living cell without damaging it. Park Yong-keun, associate professor of KAIST’s department of physics, successfully established TomoCube in September 2016 after experimenting with holographic microscopy technology capable of 3-D imaging.

His company exports HT-1 microscopes, which enable users to noninvasively examine cells and tissues to gather information, to some 50 cancer centers around the world, including the United States and Japan.

Before his invention, it was almost impossible to capture the inside of a living cell without it dying.

Earning his Ph.D. from the Harvard-MIT Health Science and Technology program, Park specialized in biomedical optics and became a professor at KAIST in 2010.

“Though right now, we only produce research and equipment,” explained the 38-year-old professor, “we are collaborating with Harvard Medical School and other facilities in the U.S. to develop medical technology to diagnose diseases and disorders.”

But Park doesn’t want to stop at inventing tools helpful in diagnosis.

“Our goal for the future is to utilize holographic laser technology to understand illnesses and to even cure patients through our technology,” Park emphasized.

“In Korea today,” said Kim Byoung-yoon, a colleague of Park at KAIST, “though we carry out many research projects, we need people who actually innovate to add something of value to science. Professor Park is that person.”