Base runners get an easy ride as home runs rain

Base runners get an easy ride as home runs rain 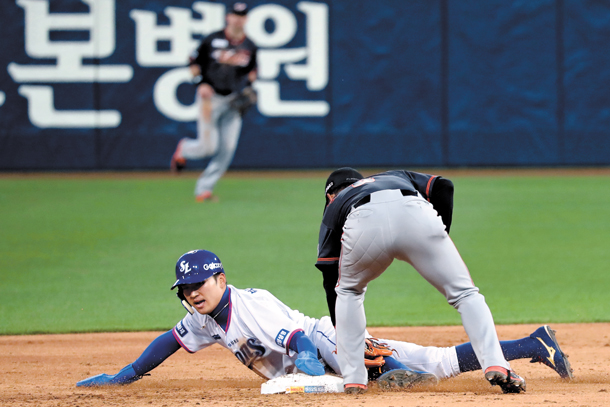 Park Hae-min, left, steals a base during a Samsung Lions game against the Hanwha Eagles at Daegu Samsung Lions Park on May 4. [NEWS1]

The KBO’s base stealers are taking a break this season. With so many home runs flying around, there’s not as much need for high-speed base runners to zip around the diamond when nobody is looking. 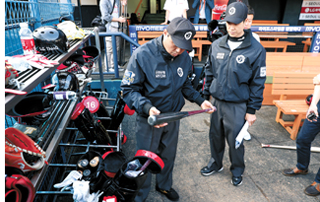 KBO officials inspect the LG Twins’ bats prior to the start of the game against the Lotte Giants at Jamsil Baseball Stadium in southern Seoul on Tuesday. [YANG GWANG-SAM]

For many years, the KBO was a runner’s league. From 2007 to 2010 the SK Wyverns, at the time led by manager Kim Sung-keun, won three consecutive Korean Series. It’s no coincidence that the Wyverns ranked second in base-stealing in all three of those seasons.

Kim worked hard to develop a defensive team with a reliable knack for bunting. The Wyverns would frequently try and load the bases, stacking up runners so that a well-timed bunt would allow a runner to sprint home.

The Doosan Bears adopted a similar strategy. Kim Kyung-moon, who managed the team from 2004 to 2011, focused on fast players. As Jamsil Baseball Stadium in southern Seoul is the biggest stadium in the KBO, Kim reasoned that the Bears could use as much speed on their side as possible.

Kim took that strategy with him to the NC Dinos, regularly assigning the fastest players to the starting lineup.

But speed no longer seems to be the answer in the KBO. Up until 2013 the average number of stolen bases per game was 2.03. Last year the number dropped to just 1.08.

This season, as of Monday, the average is at 1.27 per game. Considering players get tired as the season goes on, it will likely end up similar to last year.

Individual performance is down as well. Gone are the days of the KBO’s great base-stealing kings, who would rack up some 50 to 60 steals per season. Last season Park Hae-min of the Samsung Lions took the title with just 40 steals.

However, the success rate hasn’t decreased. Since the 2010 season, batters tend to be stronger than pitchers in the KBO. Back in 2008, the average number of runs per game was 8.97. Last year the number increased to 10.67.

“In baseball games today, a team can easily overcome a two- to three-run deficit in the last two innings,” said Han Yong-duk, the Hanwha Eagles’ manager. “Rather than a bunt, swinging helps the batters maintain their feel for batting.”

The change in the style of play may have started from the batters changing their swing to produce a higher launch angle, the key to hitting more home runs.

A few years ago, Statcast, an automated tool developed to analyze player movements and athletic abilities introduced to all MLB stadiums in 2015, reported that the ideal launch angle for home runs is between 15 and 40 degrees.

This data didn’t fall on deaf ears - batters are now aware, at least vaguely, what the ideal hit looks like, leading to more home runs.

Now it looks like the KBO batters have had their protractors out.

“At spring camp, we picked a target and trained in hitting toward that target, allowing the batters to make stronger hits,” said Chae Jong-bum, the Wiz’s batting coach. “This helped them raise their launch angle.”

The math certainly seems to work, as KBO batters have hit a total of 421 home runs as of 5 p.m. on Wednesday.

In fact, the number of home runs has already climbed so high this season that on Tuesday the KBO sent officials on a surprise visit to five stadiums to make sure that all of the bats are regulation.

The surprise inspection found seven bats that violated KBO regulations, although the violation was not in the material, but that there was no visible wood grain.

When the major league was first established, baseballs were softer, which made it harder for players to hit home runs. As a result, batters concentrated on long ground balls that could get them on base.

Even slower batters aimed for second base. In 1920 the major league changed the baseballs, and the number of home runs started to increase. In the first year that the new balls were introduced, Babe Ruth almost doubled his own home run record, hitting 54.

Longer careers may have also added to the declining popularity of stealing.

“Now, they play longer [as a professional], and sign a higher contract,” said Lee, who holds the record for the highest number of stolen bases in a single season, at 84. “This is why the number of attempts at stealing bases has decreased - to reduce the chance of injury.”