What’s next on the inter-Korean sports scene?

What’s next on the inter-Korean sports scene?

South Korea will try to team up with North Korea in as many sports as possible when the 2018 Asian Games in Indonesia kicks off this summer. 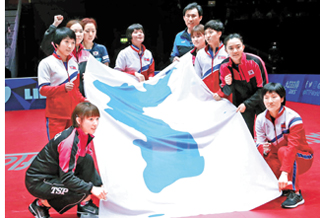 The South and North Korean table tennis players pose for a photo with a unified Korean flag during the World Team Table Tennis Championships in Halmstad, Sweden, on May 4. [YONHAP]

The two Koreas agreed to field joint teams in international sports competitions, including the 2018 Asiad, after their historic summit at the truce village of Panmunjom on April 27. If they decide to assemble unified Korean teams at the Jakarta-Palembang Asian Games, it will be the first time that they team up at the multi-sport summer competition.
,
The South and the North already made a historic step in February after they competed together under a unified Korean flag in the women’s ice hockey competition at the 2018 PyeongChang Winter Olympic Games.

Among the seven, canoeing is considered to be the most promising sport to see a unified Korean team as Seoul’s canoeing body has been active to compete with North Koreans.

The Korean Canoe Federation (KCF) recently said it will try to form a unified Korean team in the dragon boat race and will try to schedule open practice sessions on both sides of the border - at the Han River in the South and the Daedong River in the North.


Dragon boat racing features a team of 10 paddlers, one sweep and one drummer, but South Korea has not had a national team selection trial because it didn’t have athletes who specialize in the sport. This means that, even if the two Koreas form a joint squad for dragon boat racing, the two sides don’t have to worry about expansion of the entries or other selection issues.

The KCF said International Canoe Federation chief Jose Perurena and Asian Canoe Confederation President Shoken Narita have all showed their support for the creation of a unified Korean team.

Table tennis is also on its way to forming a joint squad at the Asian Games. The two Koreas already combined the women’s teams at the World Team Table Tennis Championships in Sweden and won a bronze medal last week. 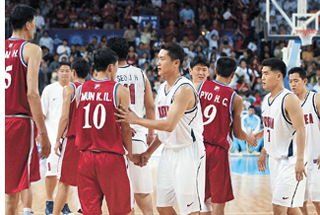 South and North Korean basketball players shake hands after their game at the Asian Games in Busan on Oct. 3, 2002. [YONHAP]

The Korea Table Tennis Association (KTTA) has also finalized its proposal for a joint team at the Asian Games, and it is hoping both Koreas will retain their allotted roster spots even if they combine their squads. The KTTA is currently discussing this issue with the International Table Tennis Federation (ITTF).

The Korea Judo Association (KJA) said a joint team with North Korea is possible if it is guaranteed expansion of the entries in the mixed team event.

The KJA said it will propose the expansion of the entries to the International Judo Federation later this week.

The Korean Rowing Association said it can form a unified team with North Koreans in the lightweight eight competition. At the Asian Games, there will be 15 rowing events, and countries can participate in a maximum 11 events. South Korea originally decided to compete in only 10 events, meaning it has one event to spare.

Basketball is a sport in which North Korean leader Kim Jong-un appears to have big interest as he mentioned it during the inter-Korean summit. The Korea Basketball Association (KBA) said it will first check North Korean players’ competitiveness before it assembles the squad.

The KBA said it plans to invite a North Korean team to the Asia-Pacific University Basketball Challenge tournament that will be held between Aug. 5 and 12 in Seoul.

North Korean basketball is still under the radar as its national team hasn’t featured in competitive tournaments since the 2010 Guangzhou Asian Games.

While each sports federation will work on its own to form a unified team, the Korean Sport & Olympic Committee (KSOC) said it will talk with the Olympic Council of Asia (OCA) for an expansion of entries and other issues related with a single Korean team at the Asian Games.