Korea likely to suffer as U.S. turns on Iran

Korea likely to suffer as U.S. turns on Iran 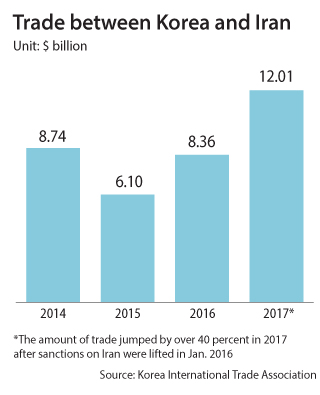 U.S. President Donald Trump declared on Tuesday that his country would exit an international nuclear agreement with Iran, a decision that raised concerns among South Korean government officials and market watchers.

Trump said on Tuesday that the United States “will withdraw from the Iran nuclear deal,” which he called a “horrible, one-sided deal.” Trump also said he would reinstate economic sanctions on the Middle Eastern country.

With economic sanctions on the world’s fifth-largest oil producer now highly likely, the South Korean government is scrambling to come up with measures to limit the impact of Washington’s decision.

The Ministry of Trade, Industry and Energy held a meeting on Wednesday afternoon - attended by local trade agencies such as Korea Trade and Investment Promotion Agency and Korea International Trade Association (KITA), as well as private companies such as Hyundai Oilbank - and decided to create a task force to prepare for a setback in trade with Iran, a major source of oil for South Korean oil companies.

“The resuming sanctions against Iran include the limitation of business in the U.S. market for foreign banks that conduct transactions with Iranian financial institutions as well as a ban on Iranian crude oil and petroleum product imports,” said an official from the Trade Ministry. “The ministry expects this could have an impact on Korea’s trade with Iran.”

Data from KITA showed that South Korea shipped goods worth $4 billion in 2017 to Iran while importing $8 billion worth of goods.

In particular, South Korea brought in crude oil worth $7.8 billion from Iran last year, accounting for 13 percent of the total crude oil imports for the country.

The total amount of trade between South Korea and Iran jumped up 40 percent after the economic sanctions on the Middle Eastern country were removed in early 2016. Oil imports shot up over 70 percent during the same period.

According to market watchers, re-imposition of sanctions on Iran would inevitably deal a heavy blow to global oil supply, which may make it difficult for South Korean oil companies to do business.

“The government will try to work with U.S. authorities so that South Korea can be exempted from sanctions [that limit importing crude oil from Iran],” said a Trade Ministry official.

Still, South Korean companies, who have been monitoring the situation for some time now, explained that they have rechanneled their source of crude oil in order to minimize their reliance on Iranian petroleum.

“We bought a substantial amount of condensate [an ultra-light form of crude oil] from Iran after sanctions were lifted in early 2016 to use to produce Px [paraxylene], which was quite a lucrative business for the company,” said a spokesperson from SK Innovation, the country’s top oil refiner. “But since things with Iran got worse late last year, the company decided to decrease the amount of Iranian condensate substantially to near zero.”

The spokesperson said it was also part of the company’s initiative to diversify oil supply. It now imports condensate from other countries such as Russia and Nigeria.

One of the notable benefits South Korea reaped from the inter-Korean summit last month was the decrease in geopolitical risk that stems from the North possessing a nuclear arsenal, considered a ticking bomb in investors’ view.

“The summit had the effect of downsizing that external risk for South Korea,” said Kim Young-ick, a professor of economics at Sogang University.

The Korean stock market pushed through the 2,500-threshold after the summit, the first time in about three months. But it took a turn after April 30, steadily retreating as investors waited for the U.S.-North Korea summit to see if the risk of nuclear war on the Korean Peninsula would continue to decrease.

Experts say that Washington’s move raised the possibility that North Korea and the United States may not be able to settle this issue in the end, which would revitalize the geopolitical risk.

“The successful inter-Korean summit has raised expectations for the U.S.-North Korea summit,” said Park. “But the [Trump] administration taking a stern stance against the Iran nuclear [deal] raised concerns in the market that it cannot remain optimistic about a denuclearization deal being made between the North and the United States.”