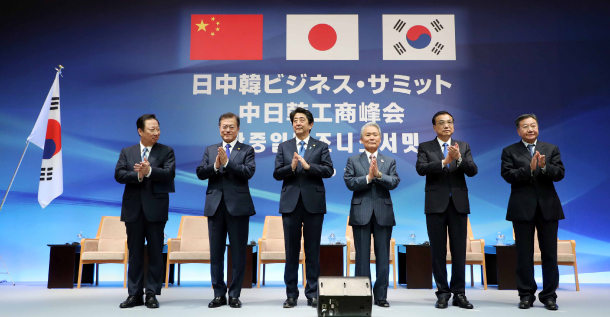 Leaders from Korea, China and Japan, as well as 50 businessmen, gathered for a summit in Tokyo on Wednesday and vowed to work together on renewed economic cooperation in Northeast Asia.

It co-hosted the business summit with the China Council for the Promotion of International Trade (Ccpit) and the Japan Business Federation.

In a speech, Moon proposed a new paradigm for economic cooperation among the three countries centered around free trade, the so-called fourth industrial revolution, energy and the environment.

Pointing out the fact that uncertainties in the global economy are growing, Moon said, “Korea, China and Japan should lead the global economic order through a new type of growth based on innovation.

“The role of businesses is crucial in stepping up cooperation in Northeast Asia and in tackling global issues,” he added.

Park Yong-maan, chairman of the KCCI, said that a framework may be established soon for economic cooperation - such as a trilateral free trade agreement or regional comprehensive economic partnership - that will encompass not only energy and infrastructure but also cutting-edge industries. The three countries will all be working on Internet of Things technologies and artificial intelligence and exchange human resources for the 2020 Tokyo Olympics and 2022 Beijing Olympics.

Businessmen participating in the summit suggested that a private sector platform for cooperation was necessary in which business organizations from the three countries may play a crucial role, he noted.

Park went on to mention the recent inter-Korean summit.

“A huge cornerstone for the future of the Korean Peninsula has been laid,” he said. “It’s time to look at the future, not the past, and make efforts together to turn hope and expectations into reality.”

Businesses in Korea will have to study the direction of systematic development and cooperation with North Korea and consider the period until economic sanctions against North Korea are lifted as a time for preparation.

At the end of the summit, heads of the three business organizations adopted a joint statement on “cooperation for inclusive and innovative growth” and delivered it to each of their national leaders.