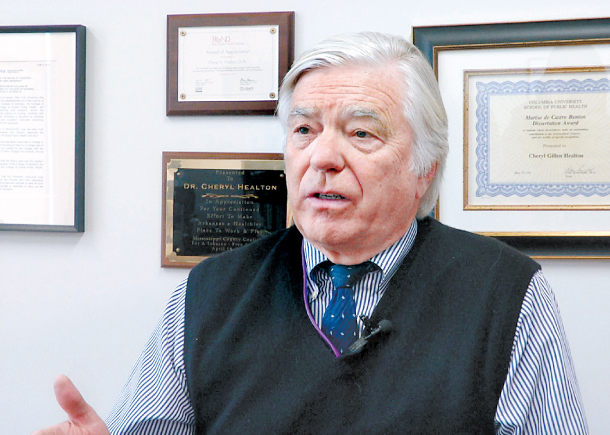 Before leaving the house, many people in Korea make sure they have their face mask with them. With air pollution reaching unhealthy levels, some Koreans are taking to the streets to demand the government find solutions for cleaner air. Others are blaming China for the problem.

“Korea must first regulate the import and production of diesel cars,” advised William Rom, professor of medicine and environmental medicine at New York University (NYU), in an interview with the JoongAng Ilbo on April 14.

Rom has been a professor at NYU since 1989, and his research focuses on the early detection of lung cancer, environmental lung disease, tuberculosis and AIDS, and policy related to air pollution and climate change.

As a legislative fellow in the Senate, Rom worked on bills to promote electronic medical records, environmental public health tracking, air pollution and responses to dust exposure after the collapse of the World Trade Center.

With concerns about air pollution growing in Korea, the JoongAng Ilbo interviewed the expert for his advice on improving the air quality in Korea and the possible health problems that can arise due to pollution.


Q. Some experts claim that air pollution from China carries over to Korea and threatens the peninsula. Do you believe this is true?

A. Yes, much of it is coming from China. Some estimates are 50 percent, [while] some are even higher up to 75 percent. With collaboration with the U.S. and NASA, [Korea] conducted some overflights of the Korean Peninsula and found out at least half of it is coming from China. But half of it is domestic from coal-fired power plants, industrial plants and diesel automotive trucks and cars.


How harmful is fine dust pollution to our health?

The long-term and short-term exposure to these particles causes heart attacks, heart failures, strokes, cardiac rhythm disturbances and probably the small PM2.5 [fine dust] is able to get through the membranes in the lung into the blood. That’s how they affect the heart. So exposure to the particles will not only increase morbidity and mortality, but [also] shorten lifespan. In the U.S., it’s calculated that we lose about six months [of our lives] from air pollution, and in China, it’s as much as a year. They also affect children. The lungs do not grow as large as they should when they are exposed to air pollution. So it’s important to control exposure both domestically in Korea and to work with China so that they reduce their exposure.


How bad was the air pollution from the 9/11 terror attack in the United States and what were some of its harmful effects on people’s lungs?

There were studies of the residents, the workers who were there called survivors and then the cleanup workers, and lastly the firefighters. What these studies have shown is that at the time of the dust, there was a decrease in breathing capability — the lung function of the firefighters, since they had data before 9/11 and after. And then following these people, there have been, perhaps half of them, suffering from respiratory symptoms like cough, wheeze, shortness of breath and significant numbers with PTSD because of the collapse.

About half of these people have reduced capabilities of their lungs subsequently and there was an increase in new onset asthma. So these people are being treated with bronchodilators and steroids, but we were concerned that an acute exposure to this kind of dust may adversely affect the lungs. We don’t know yet whether this will cause a chronic lung disease or whether cancer will be increased. [It is] now 17 years since the exposure and many of these people still have symptoms and are not entirely normal.


Some people are criticizing the Korean government for not doing enough with China to find a solution. Do you also believe the government needs to do more?

I think this is in both countries’ interest as well as Japan. So Japan, Korea, China, all working together, could have an impact. In China, they have emphasized environmental control for the future as they develop, so they are making an effort although they have a long way to go. Because their infrastructure takes a lot of cement which takes a lot of fossil fuel, steel, heavy industry and the Chinese are driving more and more automobiles, as they convert to electric [cars] and renewables, that will help.


The Moon Jae-in administration is developing plans to prevent the harmful effects of air pollution. How long do you think it will take for these plans to be effective?

First of all it is very important that President Moon has a plan to close the old, dirty, coal-fired power plants and not build new coal-fired power plants. Second is to work with the Ministry of Environment to make sure that the standards for exposure are as low as possible, at least within the World Health Organization limits, like from 50 micrograms of PM2.5 down to 25 micrograms on a daily basis.
It’s very important that he focus on diesel cars, so that diesel cars are no longer imported or manufactured in the country and that as [many people] as possible convert to electric vehicles. The government can help immensely by promoting charging stations and places where these cars can be parked and charged overnight. Korea is a small country and electric vehicles are ideal for that.

He also needs to focus on public transportation. Buses in Korea need to [run] on natural gas, which is very important. Trains should be electrified and truck transportation needs to be electrified and put on natural gas if possible. Korea has a very vigorous industrial sector. This needs evaluation so that the particles are controlled as much as possible. Convert it to natural gas and then the cement industry is also very important to make sure that air pollution is controlled. Lastly, he can negotiate with China.

The diesel engines that we thought were cleaner were actually dirtier. Diesel engines have a substantial increase in nitrogen dioxide that was not measured and even in particles. Because of this, Volkswagen and other German automotive companies are going to convert to electric vehicles as soon as they can in the future and get past the diesel engine. Volvo, for example, is planning a future of entirely electric vehicles.


When fine dust pollution is high, is the best measure to stay inside?

It’s important that people stay inside as much as possible [when pollution is bad] because it will reduce the exposure to particles as well as nitrogen dioxide and ozone. So staying indoors is helpful and not going outdoors to exercise because as you exercise you breathe in more particles.

Particularly older Koreans, who have chronic obstructive lung disease or heart disease, [must] stay inside when air pollution is severe. The kinds of masks that are helpful are called N95 or P100. A handkerchief or surgical mask is not helpful.