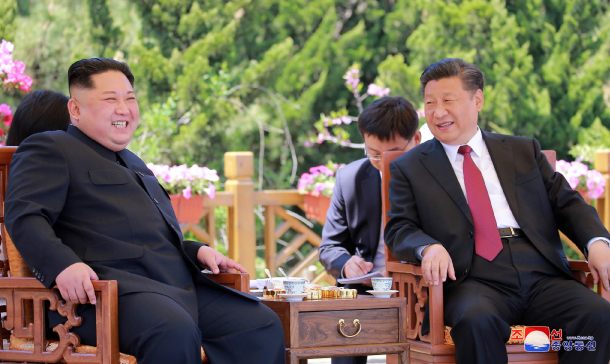 North Korean media confirmed Kim Jong-un’s second visit to China in less than two months this week to hold talks with Chinese President Xi Jinping, reporting on Tuesday night that the Pyongyang leader mentioned ways to “more actively and closely boost the tactical cooperation” between the two countries amid a whirlwind of diplomacy on the Korean Peninsula.

Pictures and posts about heightened security in China’s northeastern coastal city of Dalian in Liaoning Province circulated online on Monday and Tuesday, fueling speculation that Kim was making a second unannounced trip to China 40 days after he returned from his first on March 28, when he visited Beijing on a personal train for a summit with Xi.

This time, Kim left Pyongyang on his personal plane Monday morning, arriving back in the North Korean capital on Tuesday afternoon. Xi and his top aides traveled to Dalian, where they held a welcome banquet for Kim and his entourage. Kim and Xi talked several times over two days and took a stroll on a beach, China’s state-run Xinhua News Agency reported.

While North Korea’s state-run Korean Central News Agency (KCNA) made no mention of denuclearization, Xinhua quoted Kim as saying it has been the North’s “consistent and clear stand to achieve denuclearization of the Korean Peninsula,” adding that as long as “relevant parties abolish their hostile policies and remove security threats” to his country, there was “no need” for North Korea to be a nuclear state and “denuclearization can be realized.”

On his upcoming summit with U.S. President Donald Trump, Kim reportedly expressed hope that both countries could build “mutual trust through dialogue” and looked forward to seeing relevant countries take “phased and synchronous measures in a responsible manner” in order to achieve denuclearization of the peninsula and stabilize peace.

Shortly after North Korean and Chinese media confirmed Kim’s visit, Blue House spokesman Kim Eui-kyeom said in a brief text message to reporters on Tuesday night that Beijing had informed Seoul in advance of a meeting between Kim and Xi in Dalian.

Around the same time, Trump tweeted he would soon hold talks with Xi, saying, “The primary topics will be Trade, where good things will happen, and North Korea, where relationships and trust are building.”

As Pyongyang prepares to enter talks with Washington, some local analysts believe Kim is trying to seek security assurances from Xi, especially at a time when the Trump administration has mentioned a bundle of more subjects it wanted to discuss with the North during the summit aside from denuclearization.

John Bolton, Trump’s new national security adviser, said in an interview with CBS News, which aired last Sunday, that his team would also discuss North Korea’s ballistic missile programs, biological and chemical weapons programs, its keeping of American hostages and the abduction of innocent Japanese and South Korean citizens over the years.

“Kim Jong-un’s visit to China was a show of protest to the United States because North Korea already said it would denuclearize, yet the United States keeps raising the threshold for bilateral negotiations by mentioning other issues such as chemical weapons and human rights violations,” said Nam Seong-wook, head of Korea University’s Graduate School of Public Administration. “It’s a diplomatic gambit showing North Korea has somewhere to turn to - China - if talks with the United States flop.”

Shin Beom-chul, a senior fellow at the Asan Institute for Policy Studies’ security policy program, said Kim could be trying to pressure the United States to not make too many demands in his meeting with Trump by showing that Xi has his back.

Kim’s entourage to Dalian included several officials known for their track record of negotiating with the U.S. government, a sign that the Kim-Trump meeting was a key issue discussed between the leaders of North Korea and China.