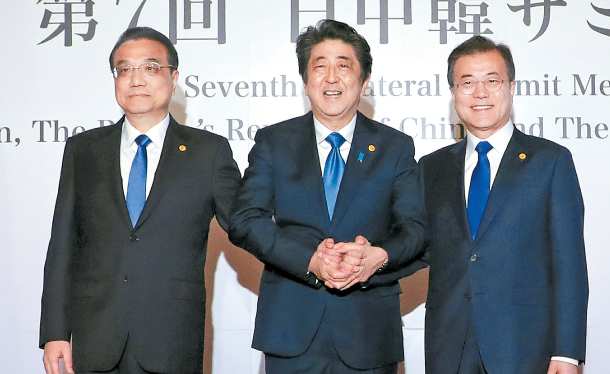 Leaders from South Korea, Japan and China on Wednesday adopted a special statement in support of the Panmunjom Declaration, which was signed at the inter-Korean summit last month and confirmed the shared goal of the two Koreas of complete denuclearization.

The special statement was made following a trilateral meeting in Tokyo of President Moon Jae-in, Prime Minister Shinzo Abe of Japan and Premier Li Keqiang of China, the first of its kind in more than two years. The last such three-way summit was held in November 2015 in Seoul.

“In the special statement, the three leaders welcomed that South and North Korea confirmed the shared goal of ‘complete denuclearization’ in the Panmunjom Declaration,” said Yoon Young-chan, the senior presidential secretary for public affairs, in a press briefing in Tokyo.

“They also expressed expectations for the successful North Korea-U.S. summit and reaffirmed their commitment to work together to contribute to peace and stability in Northeast Asia with the momentum created by the success of the inter-Korean summit.”

The full content of the statement was not made public as of press time.

The three-way meeting came amidst growing expectations for the historic summit meeting between the leaders of North Korea and the United States, for which a date and venue have yet to be announced.

The trilateral summit was held as U.S. Secretary of State Mike Pompeo flew to Pyongyang for his second visit in about a month.

At the bilateral talks between Moon and Li, the two agreed that the international community should not just make “one-way demands” on North Korea but instead should promise it a “bright future” should it choose the path toward complete denuclearization, according to the Blue House.

“The two agreed that the international community including the United States should actively participate in guaranteeing the North a bright future consisting of economic aid and regime security among other things should it carry out complete denuclearization,” said Yoon of the Blue House.

The two also recognized the possibility of building a railway that would connect Seoul with Sinuiju in North Korea and China if the North follows through on its denuclearization pledge.

Building such a railway is only feasible when economic sanctions on the North are lifted in return for denuclearization.

Li emphasized the North had the “clear intention for complete denuclearization,” adding it was now waiting for “feedback” from the United States that would correspond with such an intention.

At the Moon-Abe talks, the latter made it clear that sanctions imposed on the North should not be lifted unless Pyongyang demonstrates concrete denuclearization measures, emphasizing that the closing down of a nuclear testing site and a halt in the firing of ballistic missiles were not sufficient for sanctions relief.

“It is the timing that matters when it comes to easing or withdrawing sanctions altogether on North Korea,” the prime minister was quoted as saying by the Blue House during the bilateral summit talk with Moon in the afternoon.

“We should not reward the North for just shutting down the Punggye-ri nuclear site or stopping the test-firing of intercontinental ballistic missiles. We need additional and substantive actions from the North,” said Abe.

On the matter of easing sanctions, Moon stressed Seoul could not move to ease sanctions unilaterally, noting that sanctions were international agreements in which Seoul took part.

“There could be worries that South Korea could make a unilateral move to ease sanctions independent of the international consensus. There is no need for such worries,” he said.

Abe also expressed his wish to partake in discussions with relevant nations to set in place a peace regime in the region, reflecting Tokyo’s stance that it also has stakes in the denuclearization of North Korea. In response, Moon said that while signing a peace treaty to formally end the 1950-53 Korean War was a task for the nations directly involved - referring to the two Koreas, the United States and China - Japan should participate in establishing a peace regime in a wider context.

Touching on the issue of the abduction of Japanese by North Korea in the 20th century, a sensitive matter for many Japanese and a source of anti-North sentiment there, Abe asked Moon to address the issue with North Korean leader Kim Jong-un.

“I am very well aware of the importance of solving the issue in normalizing relations between Japan and North Korea. I will do my best to see the issue resolved,” Moon responded.

Congratulating Moon on the one-year anniversary of his inauguration, Abe gave him a cake during the luncheon. Moon won a snap election on May 9, 2017, and was sworn in the following day.