Pompeo flies to Pyongyang for the second time

Pompeo flies to Pyongyang for the second time 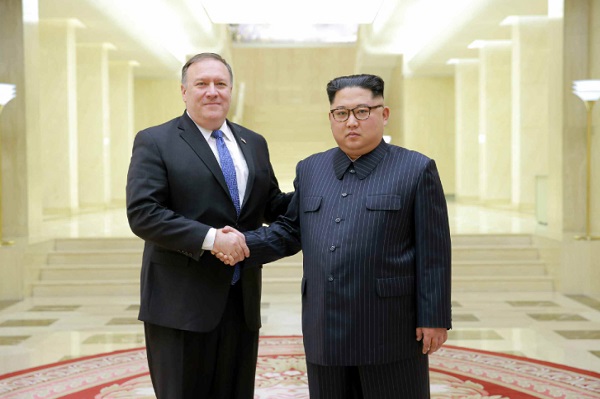 Pompeo flew in from Japan and upon arrival headed to the Koryo Hotel in Pyongyang for meetings with North Korean officials to discuss the agenda for the planned North Korea-U.S. summit. Kim Yong-chol, director of the North’s United Front Department, which is responsible for inter-Korean relations, and Ri Su-yong, a vice chairman of the Central Committee and director of the committee’s International Department, which handles foreign affairs, greeted Pompeo on his arrival early Wednesday.

“For decades, we have been adversaries,” Pompeo was quoted as telling Kim according to pool reports. “Now, we are hopeful that we can work together to resolve this conflict, take away threats to the world and make your country have all the opportunities your people so richly deserve.”

Pompeo also acknowledged, according to The Washington Post, “There are many challenges along the way. But you have been a great partner in working to make sure our two leaders will have a summit that is successful.”

Kim was reported as telling Pompeo that North Korea has “high expectations the United States will play a very big role in establishing peace on the Korean Peninsula.”

Pompeo said he was “equally committed” to working with Kim to achieve this.

Kim, while noting improved inter-Korean relations recently, was also quoted as mentioning this is “not a result of sanctions that have been imposed from outside.” Washington has claimed that its policy of maximum pressure and sanctions forced Pyongyang to the negotiating table.

Kim, also a vice chairman of the North’s Central Committee of the Workers’ Party, hosted a lunch for the U.S. officials at the hotel, with a menu including poached fish, duck and red wine.

Confirming the release of the three American detainees, Trump tweeted later Wednesday: “I am pleased to inform you that Secretary of State Mike Pompeo is in the air and on his way back from North Korea with the 3 wonderful gentlemen that everyone is looking so forward to meeting. They seem to be in good health. Also, good meeting with Kim Jong Un. Date & Place set.”

In a second tweet, he added, “Secretary Pompeo and his 'guests’ will be landing at Andrews Air Force Base at 2:00 A.M. in the morning,” referring to the base in Washington. He continued, “I will be there to greet them. Very exciting!”

Yoon Young-chan, the senior presidential secretary for public affairs, said Wednesday evening, “North Korea’s such decision will be a positive factor in the successful holding of the North-U.S. summit.”

He noted that all three detainees were ethnically Korean, adding this too was “meaningful.”

Yoon added that President Moon Jae-in during the April 27 inter-Korean summit at the truce village of Panmunjom requested North Korean leader Kim for the speedy release of six Koreans detained by the North in the spirt of reconciliation.

Pompeo’s visit came just 40 days after his first top-secret trip over Easter weekend to meet leader Kim Jong-un in Pyongyang, when he was Trump’s secretary of state nominee and director of the Central Intelligence Agency.

Earlier, Pompeo told reporters on a plane after a refueling stop in Yokota Air Base in Japan that the purpose of his visit was “to put in place a framework for a successful summit between the two presidents.” Pompeo departed from Washington late Monday.

Pompeo said there is a “second piece” to the visit, which is “to make sure that we’re square about” what its expectations are.

“We’re not going to relieve sanctions until such time as we achieved our objectives,” he continued. “We are not going to do this in small increments, where the world is essentially coerced into relieving economic pressure.”

Pyongyang has been calling for a “phased and synchronized” approach to denuclearization. Pompeo recently introduced the concept of a permanent, verifiable and irreversible dismantlement, or PVID, of North Korea’s nuclear arsenal, viewed by some as a more hard-line approach than Washington’s existing demand for a complete, verifiable, irreversible, dismantlement, or CVID.

Such a phased approach, Pompeo indicated, wouldn’t “lead to the outcome” that Kim Jong-un wants and Trump demands. “So we’re hoping to set out that set of conditions that will give them this opportunity to have a historic, big change in the security relationship between North Korea and the United States,” he said, “which will achieve what the president has tweeted about and talked about: complete, verifiable, irreversible denuclearization.”

On the three prisoners held by North Korea, Pompeo said, “We have been asking for the release of these detainees for - this administration for 17 months.”

He added that this will be discussed in his meeting with North Korean officials and that it would “be a great gesture” if they choose to
release the prisoners. He said he hoped Pyongyang would “do the right thing.”

The three detainees are Korean-Americans and two have been held by North Korean since 2017. The third has been held since 2015.

Pompeo was also expected to return to Washington with an exact time and location for the Trump-Kim summit.

The Blue House confirmed Wednesday that it was informed beforehand by the White House of Pompeo’s visit to Pyongyang. A Blue House official said, “The White House NSC [National Security Council], timed with the departure of Secretary Pompeo, informed our government of his visit to North Korea.”

A Blue House official also told reporters in Seoul Wednesday that North Korea is expected to release three Americans it has detained, timed with Pompeo’s visit, saying he is expected to bring back a “date, time and the captives.”

The return of the American prisoners would be a goodwill gesture ahead of the U.S.-North summit.

North Korean leader Kim held a summit with Chinese President Xi Jinping in the port city of Dalian during a two-day China trip that concluded on Tuesday, their second meeting in less than two months.

Pompeo tweeted early Wednesday that he was heading back to North Korea “at the invitation of the North Korean leadership” and that he looked “forward to planning a successful summit between President Trump and Kim Jong-un.”

In his visit at the beginning of April, Pompeo met with North Korean leader Kim.

Pompeo also described to reporters en route to Pyongyang that his first visit to the isolated country was an “intel effort” in order “to validate” North Korea’s position following Kim Jong-un’s invitation to hold a summit with Trump in March through a South Korean special envoy. He said he set some of the ground rules, and that it was “a limited diplomatic discussion” that had been “truly aimed at learning and listening, making sure we understood the outlines of what was at least possible.”

Just ahead of Pompeo’s second Pyongyang visit, Trump declared in Washington Tuesday that he was withdrawing from the landmark 2015 nuclear deal with Iran.

Trump broke news of Pompeo’s visit as he made the announcement to withdraw from the deal, adding it sends a critical message that “the United States no longer makes empty threats. When I make promises, I keep them.”

“In fact, at this very moment, Secretary Pompeo is on his way to North Korea in preparation for my upcoming meeting with Kim Jong-un,” he continued. “Plans are being made. Relationships are building. Hopefully, a deal will happen and, with the help of China, South Korea and Japan, a future of great prosperity and security can be achieved for everyone.”

Trump added that he will reinstate sanctions on Iran and declared, “We will not allow American cities to be threatened with destruction.”

However, Trump also said on his summit with North Korean leader Kim, as Pompeo was set to arrive in Pyongyang, “We have our meeting set. The location is picked - the time and the date. Everything is picked. And we look forward to having a very great success.”

When asked whether the detained Americans would be freed, Trump replied, “We’ll all soon be finding out,” adding it “would be a great thing if they are.”

John Bolton, the White House national security adviser, made a direct link between the Iran nuclear deal and North Korea during a press briefing Tuesday.

“It sends a very clear signal that the United States will not accept inadequate deals,” said Bolton.