Erwin Wurm creates new contexts: The Austrian artist rethinks what can qualify as a sculpture

Erwin Wurm creates new contexts: The Austrian artist rethinks what can qualify as a sculpture 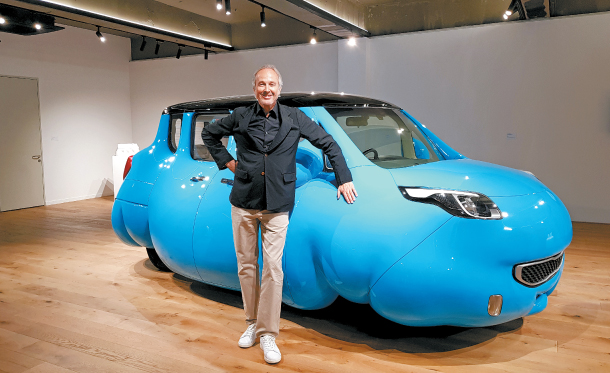 Now at Hyundai Card Storage, an art space in Itaewon, central Seoul, is a sky-blue automobile that seems to have given up on being slim and sleek like other cars. Actually, the absurdly plump car is a life-size sculpture by renowned artist Erwin Wurm.

The sculpture, entitled “Dumpling Car” is the latest in the Austrian artist’s “Fat Car” sculpture series. He created it for his first-ever solo show in Korea, which runs through Sept. 9.

At the exhibition are also several pieces from Wurm’s famous “One Minute Sculptures” series, which he started in 1997. Each piece consists of everyday objects and instructions from the artist. “The sculpture is realized” as the artist says, when a viewer strikes a pose with the objects, as instructed via a sketch and inscription.

For example, the one minute sculpture “Roast yourself under the Sun of Epicurus”(2017) comes into being for a short time, when a viewer, as instructed, puts his or her head on a pedestal below a lamp hanging from the ceiling and thinks about the ancient Greek philosopher who founded Epicureanism in the warm lamp light.

Some of the “One Minute Sculpture” pieces on view including “Double Bucket”(1999) belong to the collection of the Tate in Britain, which co-curated the Seoul exhibition with Hyundai Card Storage. The exhibit shows that audience-inviting performance pieces, or “immaterial and ephemeral sculptures,” can actually be collected.

The exhibition also includes “Ship of Fools” which Wurm presented in the Austrian pavilion at the 2017 Venice Biennale. The piece is a caravan around which people can do several “One Minute Sculptures.” The caravan, along with the visitors’ human bodies and their actions, create a composite sculpture.

At the biennale, he also showed an orange freight truck standing on its head, which visitors were invited to climb and instructed to “Stand quiet and look out over the Mediterranean Sea,” just as its title says.

Audiences often find fun and humor in Wurm’s works, including in his “Abstract Sculptures,” which depict anthropomorphic sausages, and his diverse “Clothes Sculptures.”

But the artist said in a press preview of the Seoul show in April, “My works are not intended to be humorous, although people are free to find fun. My works are more about paradox coming from the co-existence of contradicting things than about humor.”

In fact, many of his works have social contexts, as the “Fat Car” and “Fat House” series imply satire about materialism and consumers’ obsessions with bigger cars and houses. The truck erected on its head in the biennale was about the repeated tragedies of the Mediterranean sea, including the overturning of many boats carrying refugees.

The artist’s interest not only in social issues but also in forms and sculptures have made his oeuvre rich with works of diverse styles and materials, but there are still consistencies.

After the preview, the Korea JoongAng Daily sat with Wurm, who creates many complex works but simply calls all his works “sculptures.” The following are edited excerpts from the interview.

Three of the 48 photographs of “One Minute Sculptures,” taken between 1997 and 2005, are now on view at Hyundai Card Storage in central Seoul. [HYUNDAI CARD STORAGE]

Q. You said your works are not about humor but about paradox. Still, many people find them humorous. What do you think?

A. Humor can be used as a tool to bring people close to an artwork. People see something from “Fat Car” and say “It’s funny.” But “Fat Car” is about consumerism and other issues. Still, it’s also funny because it has a face. I bring different things together. But it was not intended to be funny. I made a car fat, and as a result, the car came to have a face.

It is said you began to be recognized in the art world in the early 1990s, when you started working with clothes. Are you interested in the flexible space they create?

Clothes are very flat, two-dimensional things when laid on the table. But very quickly, they [become three dimensional] when you wear them. In particular, sweaters are interesting, because they are stretchable. With their stretchable and extendable qualities, you can make unrealistic forms. I found it exciting to put sweaters in many different ways. Going with the body in sweaters can create many strange sculptures for a very short period of time.

Then, those are your earliest sculptures?

I wanted to become a painter but I was put into a sculpture class instead of painting class [when I entered university.] I started thinking about sculptures there. One of the first things I did in order to get rid of paintings [from my mind] was to make balls of oil paint - dumplings of oil paints. They were multicolored and changed as they moved. This was my first piece with which I took very flat materials like paint and combined them together into a sculpture. So I transferred very simply from 2-D to 3-D. Then I started working with clothes, and then with performances. And I started to ask questions like, “When I stand straight and quiet, it is an action or it is a sculpture?”

From left, Erwin Wurm’s “Fat House”(2003) installed at the Middelheim Museum in the Belgian city of Antwerp; “Stand quiet and look out over the Mediterranean Sea”(2017), installed at the Austrian Pavilion at the 2017 Venice Biennale; and “Kiss (abstract sculptures)”(2013). [ERWIN WURM OFFICIAL WEBSITE, VENICE BIENNALE AND LEHMANN MAUPIN GALLERY]

Then that developed into “One Minute Sculptures”?

It is a long story. I realized by doing all these videos and performances that the [physical] existence of my pieces became shorter and shorter until one day I defined it as a short-living “One Minute Sculpture.” One minute is just a synonym for short. [The] act of doing became important, while existence minimized and became very short. And there was also an end of an art piece. Before, artists like Michelangelo would be concerned about how long their works can physically survive. My sculptures defined the end of this.

I was surprised to see some of your “One Minute Sculptures” at Art Basel Hong Kong, an art fair, in March. Were they sold?

I was very surprised too. When my gallery took on this idea, I told them, “You will not sell a single piece.” But they sold one of the six pieces there to a private collector. It was very surprising.

Do you give instructions for works other than the “One Minute Sculptures”?

I did this with my sweater pieces called “Hanging Pullover.” For the work, I pulled a sweater from my head, put a nail on the wall and then hung it under certain construction that it could look like something else. So I separated the meaning from the material. It was no more a sweater, but it was something else.

To realize this, I asked the gallerists to buy the sweater themselves and sent the instructions so they could [make] the piece by themselves. And when someone bought the piece [from the gallerists], he could take the sweater home and hang it by my instructions. Or he could use it as sweater. It was a work that could go through a short-living moment of being art piece and then go back to being a daily-life thing.

Yes. For example, I made a video in which a guy puts on his entire wardrobe, on top of each other clothes, growing messy in layers of different clothes. It was sculptural experiment [about changing form] but also had social meaning, as homeless people tend to wear all the clothes they have at the same time.

I also made a piece in France where I asked a couple to go to a shop and buy as many pieces as they could wear on their bodies. It was a sculpture and at the same time a work about consumerism. But my works are sometimes misinterpreted and misused in fashion shows. [He created sculptures based on the performance and the fashion brand Maison Martin Margiela later presented clothing designed in a similar manner without crediting Wurm.]

What happens when the objects for your “One Minute Sculptures” collected by museums are worn out or broken?

Visiting many museums, I realized everyday objects used by Fluxus artists as part of their works are now seen as curiosity objects of a certain time [like artifacts in museums], blurring the clear idea of transferring daily-life objects into an art piece. It’s a problem.

So, until some years ago, I would take away pedestals and objects for “One Minute Sculptures,” when the exhibitions finished. But now I think it was a mistake. On one side, such an act clarifies the idea. But on the other side, it gives up the concept of aura. [German philosopher Walter Benjamin said aura comes from physical existence and single presence at only one place at a time.]

So, there’s a dilemma between wanting aura and wanting to immaterialize art, right?

It’s true. It’s a dilemma. I’ve learned if a piece doesn’t exist for real, not many people remember it - it may disappear. So it needs certain physical presence to be remembered and to be realized.

Still, I’m doing a [very immaterial work] since two years [ago] - what I call “word sculptures.” It consists of sentences and pedestals people can stand on. Sometimes I invite actors - normal people - to go up to the pedestals and speak the sentences, which reflect pictures and create sculptures in our heads. Let’s say, a football-size lump of clay on a light blue car roof. As soon as you hear this, you have a picture [in your mind] and that’s a sculpture. When you say this out loud other people hear it and see the sculpture. That’s a sculpture. Very ephemeral. The only thing left is a booklet with all the text about the sculpture and that can be realized by a pedestal - a platform, on which you step and read the text in the booklet.

Why do you call this a sculpture instead of a painting?

It’s because I [have been] concentrating on sculpture issues for 40 years. I create texts addressing certain sculpture ideas like “the light of the Sun is moving on your lap (when you drive a car, you see it moving).” That can be a very nice moment of sculpture. Or “a yellow tennis ball two-meter-high white closet.” That’s an image but it’s also a sculpture.

Then, how do you define sculptures?

There can be hundreds of definitions. But I would say sculptures are all the three-dimensional creations in relation to space.

One of your works that is loved by the public is the sculptures that depict sausages posing like humans. Why do you call the sausage sculptures “abstract sculptures”?

I wanted to create pieces that deal with abstract forms like [American sculptor] Joel Shapiro. He was an early constructivist that made forms that were abstract but were also related to human bodies. I tried to do this, but with my own abstract forms, which are sausages and dumplings.

And I say abstract, because I want to separate contents from the objects ? separate meaning from the material, just as I did with my sweater. So I created the so-called abstract sculptures, which are human bodies sometimes and just abstract sometimes.