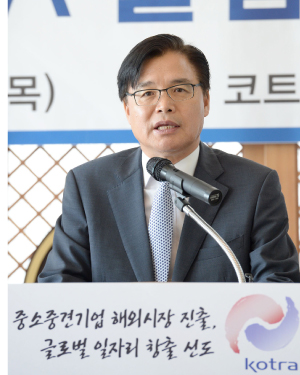 The new head of the Korea Trade-Investment Promotion Agency (Kotra) announced a plan on Thursday to invite those from outside the organization to apply to lead 22 of the agency’s overseas trade centers.

Though Kotra has previously hired those outside the organization to head some trade centers under special circumstances, this is the first time the Kotra chief announced the goal of hiring outside experts for the agency’s trade centers.

“The business environment is changing rapidly, and some have pointed out that Kotra employees often lack expertise in some areas,” said Kwon Pyung-oh, the new head of Kotra, at his inaugural press briefing on Thursday at the agency’s headquarters in southern Seoul. “At overseas trade centers that call for real experts in specific areas, rather than generalists like Kotra employees, we plan to open up the top seats to those that are most qualified.”

Kwon said the plan is part of his effort to spur healthy competition within the agency. He said this will increase Kotra’s effectiveness in the long term.

The plan will be gradually rolled out during Kwon’s three-year term, which ends in 2021.

The first trade centers to try out the new scheme will be in Washington, D.C., Mumbai and Chengdu, China. Kotra will begin taking applications later this month. The new hires will be selected in June. They will be trained for about three months and take office on Oct. 1.

Kwon admitted that some Kotra insiders doubted his plan and thought the agency could have trouble filling the position or end up with workers who weren’t dedicated. However, he said he used the lessons he learned as Korean ambassador to Saudi Arabia to persuade Kotra’s leadership.

He also added that positions won’t go unfilled due to qualification problems because the competition is still open to Kotra employees.

Kotra currently has 127 trade centers spread across 86 countries. The centers help Korean exporters find buyers, build sales networks and adapt to different business environments in key markets. Only 22 of the trade centers will be subject to the new plan.

“That number is 20 percent of the 113 trade centers that have two or more employees dispatched from Kotra headquarters,” Kwon said.

This means that the outside experts won’t be running trade centers alone, and will have the support of Kotra headquarters in Seoul.