BTS to reveal new music on a live TV special

BTS to reveal new music on a live TV special 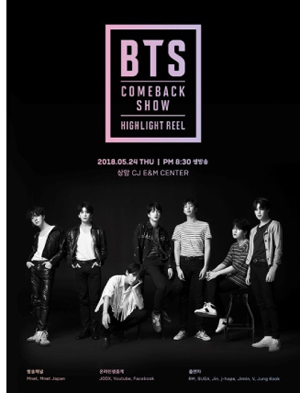 Boy band BTS will hold their first performance of tracks off of their upcoming EP “Love Yourself: Tear” through a special that will be broadcast on Mnet May 24.

The special program titled “BTS Comeback Show” will not only include performances of their newest tracks, but also behind the scenes footage and a special video for fans.

In one clip, one of the group’s members will pretend to be a member of ARMY, the name given to the group’s fans. The group will also sit down for a chat to discuss the process of making the new EP.

The show will be broadcast locally through Mnet and also around the world via YouTube, Facebook and JOOX, the largest music streaming service in Southeast Asia.

“Love Yourself: Tear” will be released on May 18, and the group is expected to perform live at the Billboard Music Awards on May 20.