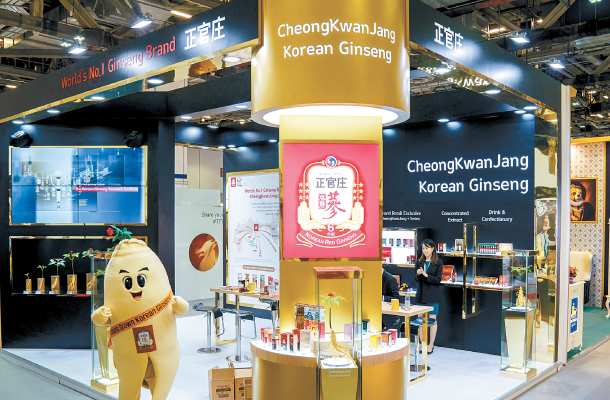 Korea Ginseng Corporation’s booth at the TFWA Asia Pacific Exhibition and Conference held in Singapore this week. This was the second time the leading red ginseng company took part in the annual event at which duty-free store operators and brands get together. [KOREA GINSENG CORPORATION]

The TFWA Asia Pacific Exhibition & Conference, hosted by the Tax Free World Association, took place in Singapore this week, closing Thursday. It is the largest annual duty-free event in Asia, with booths set up by major global brands.

Located on the second basement floor, the booth sported CheongKwanJang’s iconic red and gold emblem and tried to attract interest with plastic replicas of ginseng roots. A huge ginseng mascot waved at people going by.

“This is our second time here after making a debut at the TFWA Asia Pacific last year,” said Rian Lee, head of CheongKwanJang’s new team in charge of duty-free sales.

“Our biggest achievement last year was signing contracts to supply to Asia’s largest duty-free operators like DFS and Dufry,” Lee said. “Our plan is to continue adding top operators in Asia this year and move on next year to the Middle East.”

On Tuesday night, CheongKwanJang hosted a “chill-out party” with cocktails and iced tea based on red ginseng extract - a combination that may sound unfamiliar even to Koreans who grew up drinking red ginseng supplements.

“We received pretty good feedback from the operators that tried the drink that night,” said Lee. “Some of the responses were that the bitterness of red ginseng went well with the two drinks. [Events like this show people] that red ginseng is something they can consume on a daily basis.”

Starting out as a state office specialized in exporting ginseng during the Joseon Dynasty (1392-1910), the company has a long history in exports with sales channels in 40 countries and four foreign offices. But it’s been only three years since the company actively expanded into duty free.

Growth has been impressive: in 2016, CheongKwanJang ranked second in sales among brands at Incheon International Airport, beating Louis Vuitton (which came in third) and Dior (fifth). (First place was claimed by tobacco company KT&G.) Around 40 percent of its duty-free sales come from foreign customers, mainly Chinese. The company says duty-free stores are looking for new brands and product categories that can differentiate themselves.

M&As in recent years have led to the rise of mega-operators that run stores in many airports. Fewer operators leads to higher conformity and less diversity in the brands and products at duty-free stores, regardless of airport and country.

CheongKwanJang believes that interest in health and supplements, along with rising brand awareness among Chinese consumers, will expand their sales in the duty-free world.

“[Players in] the global duty-free market are losing uniqueness because they all present similar brands - the industry needs a fresh new item,” a company spokesman said. Its greater ambition is to expand the health supplement section as a whole. Unlike Korea, most duty frees in the world don’t have a separate health supplement section despite growing interest in such products worldwide.

There are also challenges. Unlike in Korea, where red ginseng is considered a daily health supplement for people of any age, in China it is perceived as a medicine for the elderly or patients with serious health problems. As a result, Chinese people fear that ginseng can have negative effects if taken by the wrong person.

“The core task is telling people how to eat red ginseng,” explained Lee. “So we introduce recipes like cocktail or simple dishes. Our aim is to position it as something you can consume on a daily basis.”