Gov’t touts its road map to turn around GM Korea

Gov’t touts its road map to turn around GM Korea 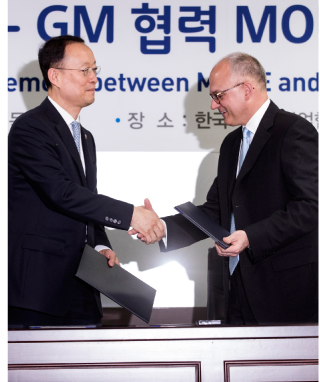 The Korean government and General Motors (GM) finalized a turnaround plan for the carmaker’s local unit, with the Detroit-based auto giant agreeing to establish its Asia-Pacific head office in Korea to demonstrate its commitment to the nation.

“The Asia-Pacific regional headquarters will be established in Korea, which will oversee the company’s affairs in the region,” said Kim Dong-yeon, Korea’s finance minister and deputy prime minister for the economy, in a press briefing on Thursday at the Seoul government complex. “We believe the decision would increase the strategic standing of GM Korea in the company as a whole.”

That decision was a key point in the memorandum of understanding (MOU) the Korean government signed with GM on Thursday.

GM’s regional office was once located in Singapore and called GM International, covering Korea, Australia and countries in the Middle East.

But that office underwent restructuring in recent years after the company shut down manufacturing sites in Australia and Indonesia. After GM downsized its operations elsewhere in the Asia-Pacific region, important functions of the office were moved to the United States, according to the Korean officials.

“Once the headquarters is established, GM Korea would be able to gain a voice in important decisions made [at the Detroit headquarters] such as plans for new vehicles and where they are manufactured,” explained Paik Un-gyu, minister of trade, industry and energy.

The decision to relocate the regional headquarters to Korea will prevent GM from exiting the country entirely anytime soon, according to the officials.

One of the widespread concerns about government financial support for the troubled local unit of GM was that the U.S. auto giant would pack up and leave after it received assistance.

In addition to the relocation of the regional office, GM also agreed on other measures that would prevent the company from exiting Korea at least for the next 10 years.

Under the deal, GM will be banned from selling its shares in the local unit for the next five years. After five years, it has to maintain a stake of more than 35 percent in GM Korea and remain the top stakeholder, explained Kim.

GM currently has a 76.96 percent stake in GM Korea.

The state-run Korea Development Bank (KDB), which has a stake of about 17 percent, the second largest, has also preserved its veto right in case GM tries to leave the country.

“If GM tries to sell off more than 20 percent of the assets [owned by GM Korea], the KDB has the right to veto,” said Lee Dong-gull, chairman of the KDB.

The rescue measure announced by top officials on Thursday confirmed details in a preliminary deal between the government and GM.

GM will provide financial support totaling $6.4 billion to GM Korea, including a debt-to-equity swap worth $2.8 billion, which the government projected would downsize the local unit’s interest burden by around 150 billion won ($139.84 million) per year. The KDB will provide $750 million in cash support and workers at GM Korea would stick to a deal made between management and the labor union last month, which the government predicts would bring down labor costs by as much as 3.7 trillion won over the next ten years.

The request by GM headquarters to designate the company’s plants in Korea as foreign investment areas - which would have granted the company a break from corporate tax on profit for five years - was on hold, said Paik of the Trade Ministry.

“Once the application is re-submitted by GM, the government plans to review it in accordance with the related law,” Paik said.

In addition to the establishment of the regional head office in Korea, the MOU signed by the Trade Ministry and GM included an agreement that GM will expand parts purchases from local suppliers. Currently, the company procures about 2 trillion won worth of auto parts from Korean producers each year, a government official said.

In return, the government will provide financial aid to the local parts suppliers to boost their research and development capacity. The funding program would provide “tens of billions of won” annually, according to Moon Sung-wook, deputy minister of industry and enterprise innovation at the Trade Ministry.

While the government touts the arrangements as indicators of the carmaker’s commitment to Korea, skeptics say they lack an actual “action plan.”

“The MOU is not obligatory and it’s clear that the government tried to gain as much as possible from the deal,” said Kim Pil-soo, an automotive professor at Daelim University. “But whether the agreement would have a substantive effect as officials say is questionable, especially because the Asia-Pacific region as overseen by the new office would not include China.”

China is the largest auto market in the world. The fact that it would be outside the jurisdiction of the regional headquarters was one of the main concerns that led market watchers to question whether the office could wield the kind of influence in the company that government officials claimed.

GM is clearly committed to its operations in China, where it sold about 4 million vehicles last year. In 2018, the company is introducing 15 new models in that market. Outside China, the company’s market share in the region is meager, hovering around 1 percent, according to data from the Trade Ministry on Thursday. GM’s share in India, the world’s fifth-largest auto market, stood at a mere 0.2 percent, selling just about 7,000 cars last year.

Kim also explained that vehicles allocated for production in Korea lacked global competitiveness, criticizing the U.S. carmaker’s decision to produce the Chevrolet Bolt, the company’s flagship electric vehicle developed in an R&D center in Korea, in U.S. plants instead of Korean factories.

It’s also unclear when the regional office will begin operations in Korea and how big they will be. Trade Minister Paik said the timing and the size of the new headquarters was still unknown, adding that it bears more of a “symbolic” significance.