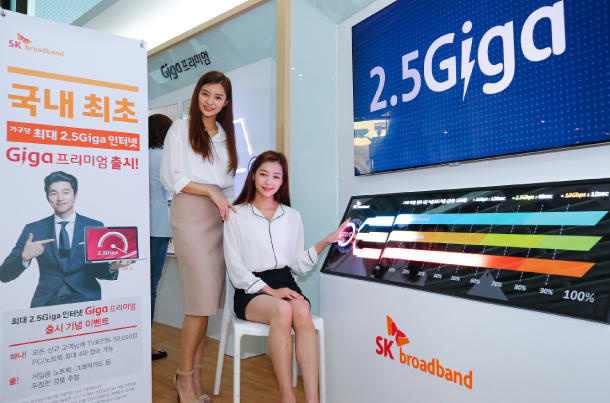 SK Broadband, the internet and television service arm of top telecom operator SK Telecom, announced Thursday it is launching an internet service with the fastest connection speeds - 2.5 gigabits per second - in the country.

According to the company, it will be the first time a 2.5 gigabits per second household internet service has been commercialized in Korea. The service, dubbed Giga Premium, offers 2.5 times faster internet connection than the currently widespread 1 gigabit per second services.

“We prepared the service considering households now use a number of internet-connected devices at once, from mobile phones and tablet PCs to voice assistants,” the SK affiliate said in a statement. “Unlike existing services that offer 1 gigabit per second speeds for each household, Giga Premium can offer roughly 1 gigabit per second for each device.”

SK Broadband says that when three devices are connected to a 1 gigabit per second internet service, the actual speed a user experiences while using each device is around 333 megabits per second.

In a more practical example, when three devices are connected to a 1 gigabit per second internet environment, each device needs about six minutes to download an ultra-high definition movie that runs for an hour and 30 minutes. On Giga Premium, each device would only need two minutes and 24 seconds to download the movies, the company claims.

The leap was apparently enabled by using so-called gigabit-passive optical network technology. It is a type of point-to-multipoint access network which enables telecom companies to use a single feeding cable to serve multiple homes, most popular in the United States. Other local competitors use a different technology dubbed Ethernet-passive optical network (E-PON) technology. SK said E-PON offers slower speeds per device when multiple devices are connected to the internet.

Faster landline internet services will play a crucial role in supporting the development of technologies such as virtual reality, augmented reality, autonomous cars and robots.

KT also announced Tuesday that it plans to launch its first commercialized 10 gigabits per second internet service by September.