‘Elephant’ looks for hope in depths of despair

‘Elephant’ looks for hope in depths of despair 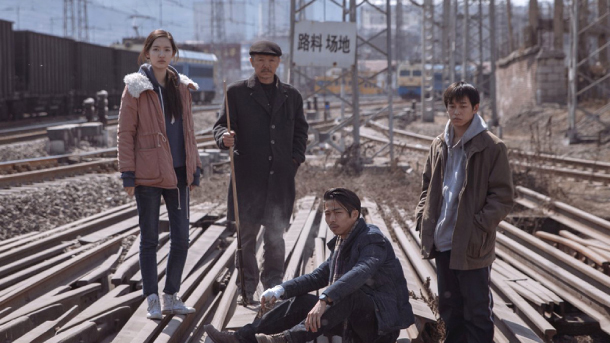 Set in a Chinese village, “An Elephant Sitting Still” follows a motley crew of four discontents who find hope from their despair in the enigmatic tale of a pachyderm unhindered by the chaotic environment around it. [JEONJU International Film Festival]

There is a line in “An Elephant Sitting Still” that encapsulates the deceptive hopelessness that permeates this relentlessly melancholic film. “Life won’t get better,” a married vice principal tells the teenage student he is dating. “It’s all about agony.”

At the Jeonju International Film Festival in North Jeolla, where it screened to a sizeable audience on Tuesday, the source of the film’s mystique, aside from its curious title, was the tragic circumstance surrounding its creation. The director, Hu Bo, killed himself before he could finish it.

With a daunting runtime of nearly four hours, the final version of “An Elephant Sitting Still” is a director’s cut by necessity, but it is a beautiful one at that, with a deserving festival run that started at the Berlinale in February.

Set in a Chinese village, “An Elephant Sitting Still” follows four people whose small-town lives have reached an impasse. Wei Bu (Peng Yuchang), a delinquent student with no future, goes on the run after pushing a bully down the stairs. Huang Ling (Wang Yuwen), his classmate and crush, begins a fling with their school’s vice principal to forget about her troubled home life. Yang Cheng (Zhang Yu), the leader of a small-time gang, is racked with guilt after he sleeps with his best friend’s wife - and then witnesses his suicide. Wang Jin (Liu Congxi), a retiree, faces the glum prospect of being shipped to a nursing home after his son says he can’t take care of him anymore.

Their paths cross in a single day when they hear word of a mythical elephant in the far north that remains still, unhindered by the chaotic environment around it. The enigmatic tale offers the motley crew of discontents hope from their despair.

“An Elephant Sitting Still” indulges in its melancholia - an unmistakable blue tint is present throughout the film - and the dialogue can be pedantic at times, but the narrative is well-stitched and moves seamlessly from character to character. The cinematography is thoughtful, with carefully constructed long takes that are cleverly framed and skillfully shot handheld. When Wei pushes his classmate down the stairs, we see the result but never the act as the camera turns from Wei’s horrified face to the limp figure of an unconscious body.

The film, adopted from a novel that Hu wrote, is a sweeping exploration of China’s societal ills - wealth disparity, industrial decay, bullying and family dysfunction - but it also finds hope in the humanity of its characters. The result is a moving swan song, composed with delicate virtuosity by a director whose light faded too soon.