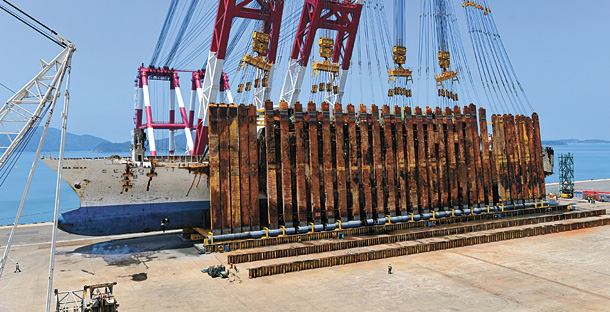 The Sewol ferry sits upright at a port in South Jeolla on Thursday. [YONHAP]

The Sewol ferry was set upright at a port in South Jeolla on Thursday, allowing investigators to reach previously inaccessible parts of the ferry and search for the remains of five passengers still counted as missing four years after the ship sank.

The 17,000-ton Sewol was salvaged from the seabed off Jindo, an island in South Jeolla, and brought to Mokpo New Port in April 2017. Until Thursday, it had been lying on its port side, the way it was found underwater, and sitting on 33 metal beams that were used to salvage it. Authorities attached 33 more beams to the bottom of the ship on Monday to begin the process of turning it. At around 9 a.m. Thursday, a water crane attached to the beams started slowly pulling the ferry and finished the job at 12:11 p.m.

One of the main reasons for setting the ferry upright is to search areas that were previously inaccessible, including the engine room and one passenger cabin located close to the port side of the ferry. An investigation of the engine room may turn up clues as to how the ferry capsized. Authorities have not been able to pinpoint the exact reason for the Sewol’s demise.

The ferry sank southwest of Jindo on April 16, 2014, killing 304 out of 476 passengers. Most of the dead were high school students on a field trip to Jeju Island. The remains of all but five people have been found, including two high schoolers, Nam Hyun-chul and Park Young-in; a teacher, Yang Seung-jin; and a father and son, Kwon Jae-geun and Kwon Hyuk-kyoo.

Relatives of the victims watched the ferry get set upright at the port on Thursday, occasionally shedding tears and calling out the names of victims.

An investigative committee on the Sewol sinking said the search inside the ferry will commence next month and may last into August. The process will involve opening up routes into unsearched areas of the ferry, installing lights inside, possibly drilling, as well as taking out sediment and combing through them for remains.

“There have been conjectures regarding why it sank,” Kim Chang-joon, head of the committee, said on a local radio show on Wednesday. “Some say it could have been that the ferry was carrying cargo beyond its capacity and could not regain its balance after losing it somehow. Others say that the ferry was hit by something from outside in the water.”

The committee expects to announce its findings by Aug. 6, when its mandate is set to expire.

When the ferry sank in 2014, the National Assembly voted to form a special investigative committee on the case, but it disbanded in September 2016 without producing many results. Then-President Park Geun-hye’s administration started talking about salvaging the ship in July 2015 but kept delaying the process.

After Park’s removal from office in March 2017 on corruption charges, the National Assembly established another investigative committee, the one that is currently working on the ship, and the Ministry of Oceans and Fisheries began the process of salvaging it.

A separate special committee formed by the National Assembly in March expects to take over the Sewol investigation.