You Share Everything With Your Bestie. Even Brain Waves.

You Share Everything With Your Bestie. Even Brain Waves. 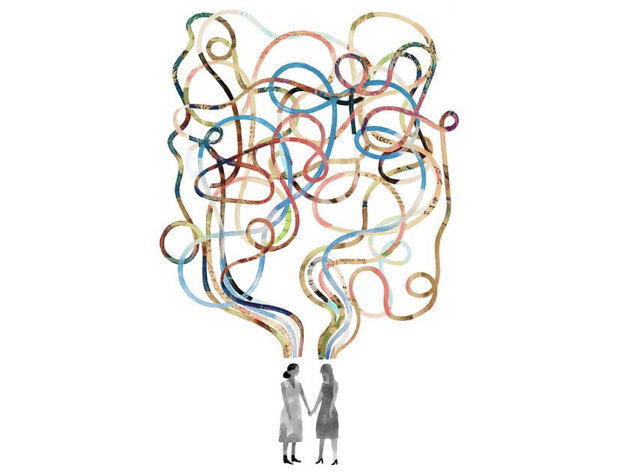 Researchers have long known that people choose friends who are much like themselves in a wide array of characteristics: of a similar age, race, religion, socioeconomic status, educational level, political leaning, pulchritude rating, even handgrip strength. The impulse toward homophily, toward bonding with others who are the least other possible, is found among traditional hunter-gatherer groups and advanced capitalist societies alike.

New research suggests the roots of friendship extend even deeper than previously suspected. Scientists have found that the brains of close friends respond in remarkably similar ways as they view a series of short videos: the same ebbs and swells of attention and distraction, the same peaking of reward processing here, boredom alerts there.

The neural response patterns evoked by the videos — on subjects as diverse as the dangers of college football, the behavior of water in outer space, and Liam Neeson trying his hand at improv comedy — proved so congruent among friends, compared to patterns seen among people who were not friends, that the researchers could predict the strength of two people’s social bond based on their brain scans alone.

“I was struck by the exceptional magnitude of similarity among friends,” said Carolyn Parkinson, a cognitive scientist at the University of California, Los Angeles. The results “were more persuasive than I would have thought.” Dr. Parkinson and her colleagues, Thalia Wheatley and Adam M. Kleinbaum of Dartmouth College, reported their results in Nature Communications.

“I think it’s an incredibly ingenious paper,” said Nicholas Christakis, author of “Connected: The Power of Our Social Networks and How They Shape Our World” and a biosociologist at Yale University. “It suggests that friends resemble each other not just superficially, but in the very structures of their brains.”

The findings offer tantalizing evidence for the vague sense we have that friendship is more than shared interests or checking off the right boxes on a Facebook profile. It’s about something we call good chemistry.

“Our results suggest that friends might be similar in how they pay attention to and process the world around them,” Dr. Parkinson said. “That shared processing could make people click more easily and have the sort of seamless social interaction that can feel so rewarding.”

Kevin N. Ochsner, a cognitive neuroscientist at Columbia University who studies social networks, said the new report is “cool,” “provocative” and “raises more questions than it answers.” It could well be picking up traces of “an ineffable shared reality” between friends.

Dr. Ochsner offered his own story as evidence of the primacy of chemistry over mere biography. “My wife-to-be and I were both neuroscientists in the field, we were on dating websites, but we were never matched up,” he said.

“Then we happened to meet as colleagues and in two minutes we knew we had the kind of chemistry that breeds a relationship.”

Dr. Parkinson — who is 31, wears large horn-rimmed glasses and has the wholesome look of a young Sally Field — described herself as introverted but said, “I’ve been fortunate with my friends.”

The new study is part of a surge of scientific interest in the nature, structure and evolution of friendship. Behind the enthusiasm is a virtual Kilimanjaro of demographic evidence that friendlessness can be poisonous, exacting a physical and emotional toll comparable to that of more familiar risk factors like obesity, high blood pressure, unemployment, lack of exercise, smoking cigarettes.

Scientists want to know what, exactly, makes friendship so healthy and social isolation so harmful, and they’re gathering provocative, if not yet definitive, clues.

Dr. Christakis and his co-workers recently demonstrated that people with strong social ties had comparatively low concentrations of fibrinogen, a protein associated with the kind of chronic inflammation thought to be the source of many diseases. Why sociability might help block inflammation remains unclear.

Researchers have also been intrigued by evidence of friendship among nonhuman animals, and not just in obvious candidates like primates, dolphins and elephants.

Gerald G. Carter of the Smithsonian Tropical Research Institute in Panama and his colleagues reported last year that female vampire bats cultivate close relationships with unrelated females and will share blood meals with those friends in harsh times — a lifesaving act for animals that can’t survive much more than a day without food.

Through years of tracking the behaviors of a large flock of great tits, Josh A. Firth of Oxford University and his co-workers found that individual birds showed clear preferences for some flock members over others. When a bird’s good friend died or disappeared, the bereft tit began making overtures to other birds to replace the lost comrade.

Yet when it comes to the depth and complexity of bonds, humans have no peers. Dr. Parkinson and her co-workers previously had shown that people are keenly and automatically aware of how all the players in their social sphere fit together, and the scientists wanted to know why some players in a given network are close friends and others mere nodding acquaintances.

Inspired by the research of Uri Hasson of Princeton, they decided to explore subjects’ neural reactions to everyday, naturalistic stimuli — which these days means watching videos.

The researchers started with a defined social network: an entire class of 279 graduate students at an unnamed university widely known among neuroscientists to have been the Dartmouth School of Business.

The students, who all knew one another and in many cases lived in dorms together, were asked to fill out questionnaires. Which of their fellow students did they socialize with — share meals and go to a movie with, invite into their homes? From that survey the researchers mapped out a social network of varying degrees of connectivity: friends, friends of friends, third-degree friends, friends of Kevin Bacon.

The students were then asked to participate in a brain scanning study and 42 agreed. As an fMRI device tracked blood flow in their brains, the students watched a series of video clips of varying lengths, an experience that Dr. Parkinson likened to channel surfing with somebody else in control of the remote.

They watched astronaut Chris Hadfield demonstrate how water behaves like a goopy gel in low gravity. They watched a sedately sentimental scene from a Jewish wedding between two people who happened to be gay men.

They watched the author Eric Schlosser warn of the dangers of allowing a few fast-food giants to control our food supply. They watched what my good friend Judy Gradwohl and I agreed, on reviewing the clips together later, was one of the worst music videos ever produced, about a man with an obviously fake facial deformity who is bullied at work and snubbed by his attractive female colleague but who eventually wins her heart when the bullies turn on her and he, Phony Elephant Man, steps in and beats them up.

The students watched pratfall comedy clips and an Australian mockumentary so subtle that certain viewers confessed they didn’t realize it was a spoof but liked it nonetheless.

Analyzing the scans of the students, Dr. Parkinson and her colleagues found strong concordance between blood flow patterns — a measure of neural activity — and the degree of friendship among the various participants, even after controlling for other factors that might explain similarities in neural responses, like ethnicity, religion or family income.

The researchers identified particularly revealing regions of pattern concordance among friends, notably in the nucleus accumbens, in the lower forebrain, which is key to reward processing, and in the superior parietal lobule, located toward the top and the back of the brain — roughly at the position of a man bun — where the brain decides how to allocate attention to the external environment.

Using the results, the researchers were able to train a computer algorithm to predict, at a rate well above chance, the social distance between two people based on the relative similarity of their neural response patterns.

Dr. Parkinson emphasized that the study was a “first pass, a proof of concept,” and that she and her colleagues still don’t know what the neural response patterns mean: what attitudes, opinions, impulses or mental thumb-twiddling the scans may be detecting.

They plan next to try the experiment in reverse: to scan incoming students who don’t yet know one another and see whether those with the most congruent neural patterns end up becoming good friends.

Alexander Nehamas, a professor of philosophy at Princeton University and author of a meditative book, “On Friendship,” appreciated the design of the study and its use of video clips to ferret out the signature of friendship.

“The aesthetic choices we make, the things we like, the taste we have in art, plays, TV, furniture — when you put them together they are absolutely essential components of our character, an indication of who we are,” he said. We live “immersed in art.”

Not high art, not a night-at-the-opera art, but everyday art — buildings, billboards, clothing, the dishes at a restaurant, the percussive rhythms of subways on train tracks.

“Watching TV clips is much more accurate to our everyday life than the times we go to a museum,” he said, and therefore potentially more revealing of who we are and what we hope to find in a friend.

So if you happened to catch “The Cute Show: Sloths!,” about a self-proclaimed “sloth sanctuary” in Costa Rica, and if your first thought wasn’t ooh, how adorable those little smiley sloths are, but rather, sloths are not pets to be cuddled and don’t bathe the algae off their fur — haven’t you heard of mutualism? — give me a call.

People tend to choose friends who are similar to themselves. Now it seems that friends share more than background, politics, and religion. They have similar brain waves. Scientists were able to predict who among a group of college students were friends based only on neural activity that was generated in response to viewing videos. The patterns of similarity were most striking in the parts of the brain where the emotional reward system lies and the area of the brain devoted to attention to the external environment.

Research has shown that social isolation is not good for one’s emotional and physical health. This suggests that there has been a selective pressure that drives humans to form social bonds. What do you think would have driven the evolution of friendship?
What came first? Do you think that people who share neural brain activity patterns are more likely to become friends, or that friend come to share brain waves?