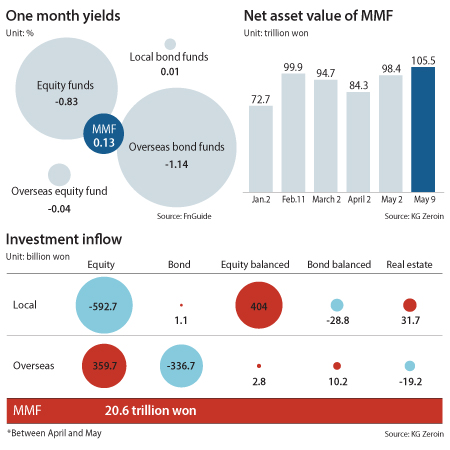 Korean investors are scrambling for safe places to put their cash, and assets in local money market funds have skyrocketed past 100 trillion won ($93.5 billion) as of Wednesday.

Money market funds are a short-term investment product with low yield potential but also low risk. They are considered the safest investments besides savings deposits and usually attract investors when new investment prospects are scarce.

The recent change was the result of growing instability in the global market.

Argentina has again been asking the International Monetary Fund for help with a crisis. The South American country is facing a massive current account deficit and soaring inflation spurred by rising U.S. interest rates, which are also affecting other emerging markets like Turkey and Brazil. As market anxiety rises, investors want to put their money in safe hands.

According to FnGuide, a financial information provider, the one-month yield on local money market funds as of Wednesday was 0.13 percent. Although the figure is close to zero, it’s better than other investments; the equity fund’s one-month yield is at negative 0.83 percent, bond funds are at 0.01 percent and overseas bond funds are delivering negative 1.14 percent.

“Currently the negative factor of rising U.S. interest rates and the positive factor of the U.S.-North Korea summit, which could help raise the value of South Korea, are coexisting,” said Lim Dong-wook, a Shinyoung Securities official, adding that, until the summit between Kim Jong-un and Donald Trump, short-term investments will continue.

Park Seung-an of Woori Bank’s Gangnam center, central Seoul, said that money market funds could continue to grow even after the summit.

“Even if the meeting between North Korea and the United States has a positive impact on stocks, the local market could face the larger challenge of continuously rising U.S. interest rates,” Park said.

Park added that investors are waiting for any kind of signal, whether good or bad, and are seeking short-term investments like money market funds instead of burying their money in other products that could take more than a year to mature.